So, I had the distinct pleasure of attending the dress rehearsal of Avenue Q last Thursday at Eastlight Theatre. My good friend, Phil Raso, has a role in the play/musical/comedy. I was so impressed with the whole shebang I promised to blog about it.

However, someone has beat me to it, so I want you to read their "review" first:

Actually, I wasn't really planning on writing a review per se. I'm not a playgoer. In fact, they're really not my thing. I don't understand why people feel they must sing what is normally said. It seems odd. I don't watch Glee.

So when my good friend Frandy invited me to see her husband perform as a puppet in this "adult version of Sesame Street", I thought, "Is she for realsies?"

Apparently my aversion to the theater has made me miss out on seeing the "full blown" version of this hilariously disrespectful gem. Even tamed down, I still found myself gasping with my hand over my mouth like a little old lady who just got her ass pinched.

Here's the deal. I'm not well-versed enough to tell you how deep the character plot was or how resonant the actor's voices were or their stage presence or anything like that. I don't have a clue. But I'll tell you what I saw.

Picture the scene on Sesame Street. Now picture the puppets. Except the guys that control the puppets are right there on stage with them. The thing is, you don't really notice them, because they are SO GOOD at letting the puppets do the acting FOR THEM. After awhile, you're watching only the puppet, even though the voice is coming from the guy with his hand up its furry ass.

Anyway, these puppets. They're not learning about sharing, counting, or the letter "M". There's no "C is for Cookie", "It Ain't Easy Being Green" or "Rubber Duckie". Nope. Instead, the song list includes, "It Sucks to be Me", "If You Were Gay" and "Everyone's a Little Bit Racist".

It does suck to be you sometimes. And sometimes, when someone tells you how much their lives suck, you feel the need to outdo them and show them that your life sucks even more. True? True.

Everyone IS a little bit racist. You can tell me you're not. You are. Don't lie.

But seriously. It takes a lot for me to laugh. Really, really laugh. And as much as I laughed, it also gave me quite a bit to think about above and beyond the depricating humor. Specifically, the angelic voice of Kates Sitton as Kate Monster laments in "It's a Fine, Fine Line" that there's a fine, fine line between love and a waste of time, what you wanted, and what you got. Who thought I'd tear up listening to a monster sing that? And Schadenfreude, an amazing tune that talks of how we all derive pleasure from other's pain. Tough to admit, but at times true, no? Just a little bit? Come on.

What I'm saying is - from someone who isn't particularly interested in seeing theater productions of any kind - I'm dying to go see this again. And to take my husband. And my friends. But not my kids. This is definitely a "Rated R" kind of play - and that's with it tamed down to Midwest standards (which is kind of too bad).

So go see it. Here's a link to the show dates, times, prices, cast list, and everything else you need to know. If you want a good belly laugh and a little does of reality, check your high horse at the door and go see Avenue Q.

I'm getting ready to blow this Popsicle Stand soon, but before I leave, I want to give a shoutout to this town that's been my home for 20-some-odd years. Here's my shortlist of the little things that make Peoria big on my list:

10) The fact that I can get anywhere in 20 minutes or less. Out to the country (Kickapoo Creek Winery!), downtown, across the river (where I RARELY go). I remember when I moved back here from Chicago and had a job interview - I left 45 minutes early and ended up sitting in the parking lot for half an hour. 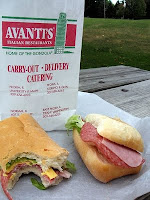 9) Avanti's. I know. Some people are sick of it (like my kids, who are force-fed it at least once a week); others who have moved away crave it. It's good, it's cheap, it's dependable. For those of you like my New York brother who "don't like the bread", suck it. 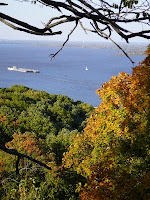 8) Grandview Drive. I mean, who doesn't love this amazing-view-tree-lined-street-where-incredibly-rich-people-live? Where else can you chill out with a coffee, make out with a sweetie, or get drunk for the very first time with God knows who???

7) Running into people I know. Not in a super-duper, small town weird way where everybody knows your business, but being able to walk into a restaurant and know you'll see a familiar face or running into your ex at Wal-Mart when you're wearing no makeup, your glasses and an unflattering pair of exercise pants. (OK, that I won't miss). 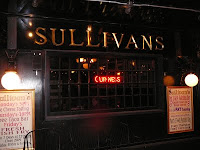 6) The Heights. Granted, it was better when Sullivan's was Sullivan's, but it's still a hoppin' place to be on a Friday or Saturday night. Dinner at Seven never disappoints, and though once long ago we would have crossed the street to see Sully hanging outside smoking and talking someone's ear off, now we head up to 309 or Tavern to see what Travis is up to. It's all good.

5) Walking and hiking. There's so many places to do that here. Grandview Drive is about 5 miles round trip, and lots of what I call "butt hills". From the top to the entrance to Forest Park Nature Center takes about 45 minutes, which is about 30 minutes longer than my kids can handle. And good 'ole Orange Prairie Road can be a four mile trek with an occasional "hi neighbor" wave at a passing car or fellow walker. 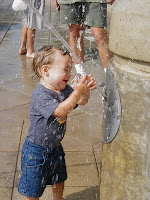 4) The Riverfront. Where I'm going doesn't have one of these, and it makes me want to tell you all that you should really appreciate it. From the festivals to Kellehers in the summer to letting the kids strip down and run through the fountain on a hot day, it's a really unique aspect of this town that is made fun of way too much. 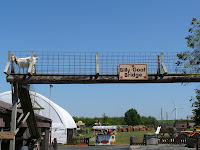 3) The Apple Orchards. That includes Tanner's and Apple Blossom Farm. I have photos nearly every year of the kids standing in front of the Tanner's apple height chart. Every year, no matter how big or small, they ride the tractors, feed the goats and munch on the apple cider donuts. Tanner's is a field day, Apple Blossom Farm is so close to us it's an after-school trek. I'm wondering how many thousands of photos I've taken of my kids over the years in these two locations alone. 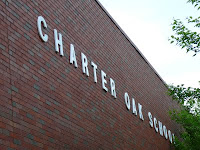 2) Charter Oak School. Say what you want about District 150; Charter Oak is a diamond in the rough. I've said it many times - if you want the best teachers, wonderful principal, first rate curriculum and an involved PTO, Charter Oak is where you want your child to spend 5 years of his or her life. I've never had such positive vibes about anyplace and I would repeat those years with my children in a heartbeat just to be there.

1) This neighborhood. As I sit here in the dwindling light, I hear a handful of children in my backyard on the swingset. The moms and dads have already called the younger ones in, but the older ones are allowed to stay out until dark, where they will play flashlight tag and hunt for the first lightning bugs of the season. All ages, all backgrounds. It never mattered here - we're all friends - all family. And that I will miss the very most.