How to change your life in three minutes or less

I feel like I am totally riding Phil Luciano's coattails. No matter what you think of him, dude can tell a story. And this is a good one. An extraordinary one. One that begs to be told.

I blogged about Phil's article on Kevin Harmon (author of The Archangel Response) a few weeks ago (Writing without hands). I've had the incredible honor and privilege to come in on the tail end of this huge undertaking, and to help Kevin get the word out there that this book is worth reading (and worth being picked up by a publisher... hint hint.) I got to talk to Kevin about the article and he was beyond appreciative and floored by the response. The day after the article ran, his new political thriller was flying off the shelves at I Know You Like A Book as well as online.

As grateful as Kevin was for Phil's article, which outlined his accident 26 years ago that left him quadriplegic, his 10-year endeavor to write a novel, and the heroic support of his father, he felt there was more to say. And boy, did he say it.

I was talking to a friend of mine about Kevin, and how I felt so very lucky to have met him and be a part of getting his story told. It had made me think: everyone has extraordinary qualities within them. But usually, it's not until something extraordinary happens in their lives that these qualities manifest themselves. I wonder, how would I have lived with this situation? If I were Kevin? If I were his father, Ed? I don't know. And I bet they didn't either. And I'm sure they wouldn't consider themselves extraordinary. But I do. And Phil does. And you should.

So, if you want to see what extraordinary is like, and change your life in the process, take three minutes to read Phil's intro to Kevin's poignant take on life, and his thanks to the people who have helped him realize life is so worth living:

Kevin Harmon gives his thanks... and so much more

Go to www.kevinharmon.com for information on purchasing The Archangel Response.

The best part about Valentine's Day is... the day after

Anyone who knows me knows I'm not a fan of Valentine's Day. In fact, if there is any redeeming quality at all for this 24-hour pseudo-lovefest, it's scavenging the 50% off chocolates at CVS the next day. Not the crappy cheap Palmer stuff that tastes like chocolate-flavored laxatives. The good stuff - like those yummy Dove chocolates that if you pop in your mouth quick enough you forget they're heart shaped.

It's not that I had some traumatic childhood experience with Valentine's Day - or maybe I did and I've just blocked it out. OMG, maybe I have PVDSD - Post Valentines Day Stress Disorder. I'd better add that to the ever-growing list of "issues to talk to my next therapist about".

I remember doing the Valentine's Day thing in grade school. It was no big deal - pretty much the same, lame 2" x 3" flimsy paper valentines with a lollipop attached and some witty prose like, "I'm a sucker for you, Valentine!" I'm no idiot. I was the sucker, Bobby Kirk. You were totally two-timing me in 6th grade. Don't think I didn't know about it - I just let it happen.

I think I actually got my first real valentine in 8th grade - a heart-shaped box of candy. Like a big, heart-shaped box. I remember thinking, "I didn't even know these were real!" I recalled seeing them in the movies, or on TV commercials. I didn't really ever think people could go out and purchase these ginormous, shiny foil and lace heart-shaped boxes of chocolates. And I totally scored one. I don't remember anything about the chocolates, but I kept that box for a long time.

My girlfriend and I were talking today about how we loathed this day back in high school. It would start a couple of weeks ahead of time - the annual "buy carnations for the most popular girls in the school so all the rest of them can feel like losers" flower drive. Maybe that's why I don't really like to get flowers all that much.

That sounds weird, right? I mean, who doesn't like to get flowers? They're pretty, they smell nice, and if delivered to your office, make you the envy of every other female in the joint. 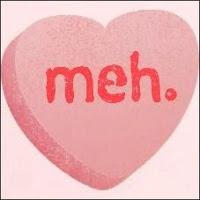 See, again, this is where the PTSD may figure in. Looking back, the only time I seemed to receive flowers was as a direct result of someone screwing up. Apology flowers. I'm sorry flowers. I'm sad take me back flowers. Not happy, you're-way-more-beautiful-than-these-dozen-roses-flowers, but sad, every-time-you-look-at-these-you'll-remember-what-I-did-but-I'm-sorry-flowers.

So now, flowers kind of make me nervous, even if they're given with the most thoughtful intent. I see them and I cringe. What's he hiding? What's he making up for? What did he DO? And to receive them on Valentine's Day (yes, this sounds very jaded and callous) means "Crap. It's Valentine's Day and I'm being sucked in by commercialism and the $18.88 dozen roses at Kroger."

If I am with you on Valentine's Day, I don't need flowers or candy. But I might need a lift on March 23rd. A sweet surprise may make my day on April 17th. And I could possibly need a reminder that you're thinking of me on May 11. That can be a thoughtful text in the middle of the day, a surprise date on a Saturday night or a glass of wine waiting at the end of a long day. Sometimes, I think that might be harder than following the masses to Wal-Mart on your way home from work on February 14.

But don't get me wrong. If you do the Valentine's Day thing and it works for you, then by all means - go for it. As usual, I'm in the disenchanted, apathetic minority. But if you did score big today, they stay out of my way tomorrow. I'll be first in line for those discounted chocolates on February 15.

Posted by Amy Talcott at 9:15 PM No comments:

Now I think I have the green light. His story is out there - in today's Peoria Journal Star (OK, it's a start). And I can't think of a better local writer to cover it than Phil Luciano.

Click here to read Phil's article in the Sunday, February 5 edition of the Journal Star:
"18 to 80 in seconds"

(If for some reason this link doesn't work, just go to www.pjstar.com and look for Phil's article, or find it on my Kennard Communications Facebook page.)

When I first learned about Kevin Harmon and his book, I was intrigued. My boss was helping a friend of his publish his first novel. As a writer, of course, that naturally piqued my interest. How was he going about it? Did he have an agent? Was he self-publishing? If so, how did that all work? And beyond that, I am forever impressed by ANYONE who can take the time and the forethought to actually come up with a storyline, develop the characters, do the research, and make it blossom chapter after chapter after chapter. My blogs come easy - they're short and sweet. But a novel? To think of it day in and day out. To write in a consistent voice day after day - on a good day or a bad day - almost having this second life as you make your characters come alive like they are right there in the room with you.

Without the use of your hands.

Above and beyond my appreciation of anyone who can write a novel, it is tripled when I discover that the man who is writing this novel is doing it from a wheelchair and a hospital bed, using his voice as his pen. And that he's been doing it for nearly 10 years.

See, Kevin Harmon, in addition to being a talented and dedicated writer, is also quadriplegic. Which he doesn't care if you know or not. In fact, he'd probably rather you not know. Because he wants to be Kevin Harmon, the author. Not Kevin Harmon, the quadriplegic author. But with apologies to Kevin, he sells his accomplishments short. It's not that he's quadriplegic, it's that he's OVERCOME it and done what I can't even do with full use of all my limbs. 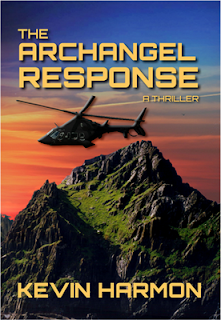 So what's the book about? Self-help? Overcoming challenges? My struggles in life? No way. Kevin has a lot of time to think, and a lot of time to watch TV. He's so over all the CSI-type shows and their bad writing. He can do better than that. So he did. WAY better. The Archangel Response.


Kevin had a scenario in his head for years, and he wondered: In an age when individuals are capable of acquiring multi-billion dollar fortunes, and with them the power to influence governments, what prevents some men from going the next step - and actually becoming governments unto themselves? He then developed a fascinating character named Michael Cavanaugh; wealthy, powerful, and the founder of one of the world's largest technology companies in the world. In the end... well... I can't tell you, but it is full of dynamic and unpredictable twists and turns that will leave you wanting more. And there will be more. Kevin's already planning a sequel.

In the past few months I've had the pleasure of meeting Kevin in person and spending several hours with him, writing his biography, gathering information for his press kit, and generally just picking his brain. And over the past few weeks - especially today - I can't get over this incredible respect I have for this man. First and foremost, that he was able to do what is my dream - to write a novel. Secondly, that he did it under extraordinary circumstances and over a period of 10 years. And third, because I want him to succeed. He deserves to succeed. Because he is a good writer. Even without the use of his hands.

Think about it. Kevin uses Dragon Dictation Software, a voice-recognition program. He speaks everything, from telling his computer to wake up to inserting a period to making corrections and edits when the computer misinterprets what he's said. Painstaking. He says the software can recognize up to 100 words per minute. Each page of his book has approximately 400 words, and is more than 500 pages long. That alone is quite a feat, not to mention if  you are a writer you know the edits along the way that your fingers make automatically - imagine having to verbalize each and every one.

Watch this video by Phil Luciano of Kevin and his software in action:

Do me a favor. Be as amazed as I am. Buy the book. Go to his website at www.kevinharmon.com and follow the links to download the e-book version on Amazon.com, BarnesandNoble.com and Smashwords.com.

Or, even better, and my personal choice, get a paper copy. Call I Know You Like A Book in Peoria Heights at 309.685.2665 or email bookstore proprietor Mary Beth Nebel at youlikeabook@comcast.net and tell her you want to pre-order it. The Archangel Response should be available there in a couple of days, hot off the presses.

I know there are incredible people out there all over the world who are overcoming challenges and doing extraordinary things, day after day after day. Today, I am honored to know just one of them.

Congratulations to you, Kevin. I hope to find you on the New York Times bestseller list soon - I don't doubt you can get there.