Ask anyone. When I told my friend I got a dog her response was, "I would have been less surprised had you said you got a monkey."

We had a dog growing up, but I didn't really have to do anything with her. We never had her on a leash, she was trained not to go in certain rooms, and to my knowledge she never pooped. When she died I was sad, but it never occurred to me to replace her. Ever.

When I called my parents last week and asked them to come with me to see about a dog, they probably would have reacted better to me telling them I was pregnant. "A dog? Why? You don't even LIKE dogs. You said you'd NEVER get a dog. What are you going to do with a DOG?"

I blame my friend Diane. She posted one of those "OMG look at this cute doggie he's at the shelter and if you don't go adopt him he'll be KILLED" pictures. Normally these don't phase me, but for some reason, this one did. Sad to say, I didn't save this dog. As much as I wanted to, he wasn't too good at pleading his case. He jumped and nibbled and howled and generally shot himself in the foot with this tough customer. I'm all about saving the dog, but apparently I need to save the perfect dog, which to me is one that doesn't bark, shed, jump, lick or have a colon.

I had seen a couple of contenders on Petfinder.com, which is kind of the Match.com for people looking for pets. I contacted the shelter, The A.R.K. in Lacon, and they said they were going to have the dogs at PetSmart in Peoria the next day. Good. I'm not driving all the way to Lacon just to feel guilty about NOT getting a dog I didn't even want. 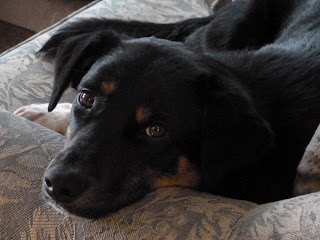 Short story long, the dogs there didn't quite fit my stringent criteria. I voiced this to the A.R.K volunteer, and while I know she was thinking, "This girl would be better off with perhaps a fish," mentioned there was one dog that may fit the bill and she would bring him to the store tomorrow. Fine. The next day, I figured I'd run over to PetSmart "real quick" then go to my parents' house and do my taxes. That was at 1:30. At 1:45, I called them and said, "Um, can you meet me at PetSmart?" At 4:45 pm, I walked out with Domino.

Domino was given his name at the shelter because, I was told, he was "sweet as sugar". He was rescued by The A.R.K. in January after being surrendered by his owner at the Centralia Animal Shelter, and they estimated him to be around 3 years old. That's all the background I have on this dog.

What I do know is that aside from doing all the things that dogs do, this is pretty much the perfect dog for me. We walked around PetSmart for probably 2-1/2 hours and bent the ear of the trainer there for most of that time. We tested him around other dogs and kids of all ages. We tried to figure out his real name (note: it is not Spot, Rover, Mayonnaise, or any of the Irish beers). He only barked once, sat by my side on the leash, and peed three times in the store. Everyone who came in contact with him remarked, "What a good dog!" All I could say was, "Thanks. He's not mine." 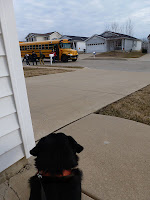 Well, now he is. And so far, he's a great addition to our family. In fact, he makes us feel like more of a family. My kids are still stunned and in disbelief. I had told them emphatically that we were NOT getting a dog. Ever. So much for consistent parenting. Domino and I sat on the front porch and watched my oldest son get off the bus this week. He walked up and said, "Whose dog?" My other son came home and said, "Who are we dog sitting for?" When they found out that Domino was, in fact, OUR dog, they were speechless. And for the first time since they were toddlers, we all sat around on the floor, no TV, no video games, and hung out as a family. With a dog.

Now don't think I'm living in a dream world. While Domino is "sweet as sugar", he is also, by definition, a dog. Which means he has his own set of doggie things that he does that will need to be tweaked, trained, and terminated. But let's just end this feel-good post on a positive note - you know there will be more to come from me on this canine conversation.

Welcome to the family, Domino. This song's for you: