I’ve had an epiphany! 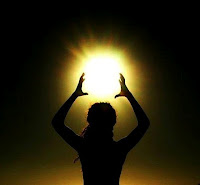 That’s what I told my friend the other day. She – knowing me pretty much better than anyone else – said, “OK, bring it. I’m all ears.”

Apparently I have epiphanies on a regular basis.

Here’s the deal. I have realized that for the most part, I’m always slightly stressed/worried/upset about something. If it’s not work, it’s kids. If it’s not kids, it’s family. If it’s not family, it’s relationships. Or finances. Or my weight. Or any one of a thousand of my own insecurities. Or my dog. Stupid dog.

Obviously, I’ve never been one of those “not a care in the world” people who live by the seat of their pants and seem to have a sort of invisible fence between their brain and these seemingly insignificant issues that are an integral part of the lives of people like me. I’ve always been envious of people like that – the ones who don’t seem to worry about if so-and-so is mad at them, or if they’ve done something inappropriate, or if they haven’t been as diligent or attentive or whatever it is they are expected to be with their jobs or their relationships. I don’t think it’s that they are uncaring people – I just truly believe that their brains are wired differently. Those things that can make or break my day are inconsequential to them. Their epiphanies probably are more along the lines of finding cures for cancer or inventing the cotton gin.

But back to my epiphany. Lately, I have found that my stress triggers have been in the areas that I consider to be a priority; however, that priority has not been a two-way street. In other words, what is a priority to me has not necessarily been reciprocal.

For instance, I love my job. I really do. 90 percent of the time I love what I do for a living and the people I work for and with. After some pretty crappy past jobs situations and 19 months of unemployment, I continue to wake up every day thankful that I can get in my car and drive to a place where I enjoy what I do. But there was a time recently when that 10 percent crept up on me. I think it happens to us all. I felt overwhelmed with projects that I didn’t think I knew enough about, overwhelmed with the work/home imbalance, overwhelmed at the fact that I felt I had so much I wanted to give to this job but it just wasn’t possible and/or there just wasn’t a place for it. Now I feel this has been somewhat rectified and that I am in fact as much of an integral part of my company as they are to my professional life. And that’s a really good thing. Now I feel as if the priority I give to my job is reciprocated. That’s a great feeling – and it makes me want to do an even BETTER job. And THAT makes me happy.

My kids are obviously a priority and I love them more than life itself. But as any working parent knows, and any single parent can relate, there is a constant sense of guilt for not being there as much as you feel you should, bewilderment as you enter a new phase of their struggle for growth, and lack of patience from having the responsibility of them with only every-other-weekend support from the other parent. And I struggle with my kids at the ages they’re at in that I feel as if I give to them and a) they take and want more or b) they don’t want anything to do with me.

It’s tough now, but what I have to realize is that the Kodak moments you have with your kids when they’re pre-teen and teenagers are not planned – they are spontaneous. You can plan a day at the beach - pack your fishing gear, plenty of sunscreen, sandwiches and lots of snacks – and they can fight all day until you end up walking away from them and sitting on the damn beach by yourself just to get some peace and quiet. Or, they can come home from a weekend at their dad's and decide that they missed you so you at the last minute go and get smoothies for dinner and recreate the Wayne’s World version of “Bohemian Rhapsody” in the car on the way home. Unbeknownst to my children, in that moment they made me a priority, so I damn well made sure they knew they were mine. But they’re the exception of sorts to this priority rule since they’re not old enough really have true priorities other than getting to the next level of Minecraft or seeing who can fart the loudest; however, I think deep down they know that if I weren’t around they’d be in a world of hurt.

Then there are relationships. The ones that may be important to you but you take for granted. God’s one of those for sure, though I’ve come a longer way in the past few years than I have been ever in my life. My family has always been an overall priority, but it’s easy to assume they’re always going to be there without any cultivation or legwork. When my mom got cancer, it was a no-brainer to move her to the forefront of our priority list – and I think it served as a reminder to the four of us kids that our parents pretty much deserve to stay up there.

I’ve realized lately that I’ve neglected some of my friendships and that these people not only support me, they’re going through things too. I spent time with three different friends this past weekend and discovered that the admiration I have for them is actually shared in return. WOW. Really? How cool is that? That in itself made me realize there are other relationships in which I put an enormous amount of energy, yet get very little in return simply due to the fact that we do not have parallel priorities.

That’s really what it’s about, isn’t it? That’s the epiphany. Parallel priorities. Learning to live your life spending your time with people important to you who feel you are of equal importance to them. And learning to let go of those people and things that may seem incredibly important to you, but somehow at the end of the day, when you are exhausted and stressed out from analyzing why you don’t feel any sort of fulfillment or satisfaction or peace, you reluctantly realize that you must move them further down the list – at least more in line to where you are on their priority grid.

You may now cue the angels with their chorus of Hallelujah. And you’re welcome.
Posted by Amy Kennard at 4:27 PM