What's the deal with boys and their dads? It's a question I've asked myself ever since my oldest was a baby, when even though I incubated him for nine months and birthed him for almost a day, gave his first smile to his daddy, as well as his first word and first laugh. 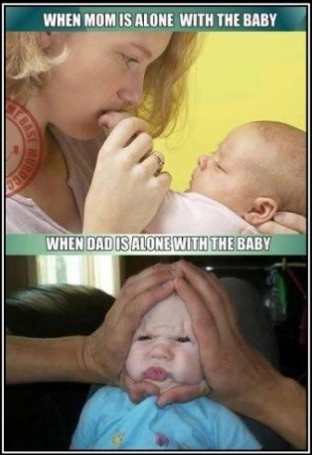 That kid is 17 now, and he's still responding to his dad the way he did when he razzed his belly on the diaper changing table and made him giggle like, well, a baby.

Let me just say this. I am so very grateful that my son idolizes his dad. I really am. Everyone should have a hero, and what better person than your own father? I know my dad is my hero, but I'm a girl. Not all sons look up to their dads, and I feel lucky for him, lucky for me, and lucky for his father that's how it's played out.

But selfishly, in my darkest place, it bugged me. For like 16 years. But over the last six months or so, I've started to get it. And I say that only because of a conversation I had yesterday with a new friend who finally managed to get it through my head and completely change my perspective.

I've had more time with my son than his dad has had. That's just the way it is, and probably the way it is in most families, especially when divorce is involved. I've seen the really good and the really, really bad. I don't get the four days every other week where I'm not working and there's no chores to be done and very few errands to run. My life with them is the same as my life without them. That's just how shit played out.

I remember my son came home one day after middle school and was just being a holy terror. I asked him, "They say you're so good at school. Why do I get to see this side of you???" He replied, "It takes so much out of me to be good at school all day, Mom, that when I get home I just can't do it anymore."

If nothing else, my kid is honest about his feelings. And he was right. He COULD be a holy terror at home, because he knew no matter what, I'd still love him anyway. And I didn't see that for a really, really long time. Even though his dad said to me, "They come to me to wrestle, but if they get hurt, the first person they want is you."

Again, I caution that I'm not saying that my son can't be a holy terror around his dad. He sure as hell can. But the difference, I think, is that my son wants to prove something to his father. He wants him to be proud of him. And even though I know his dad IS proud of him, for some reason this is an elusive and continuing journey for my son.

Last weekend, we were fortunate enough to spend time together on a gorgeous lake in Idaho. My gracious friend with whom we stayed had a jet ski and offered it to all of us. My son's dad took it out first and of course opened it up on the lake. Then it was my son's turn, and he had to make sure he went a little faster than his dad. Back and forth they went, taking turns and doing tricks and pushing the envelope of speed. 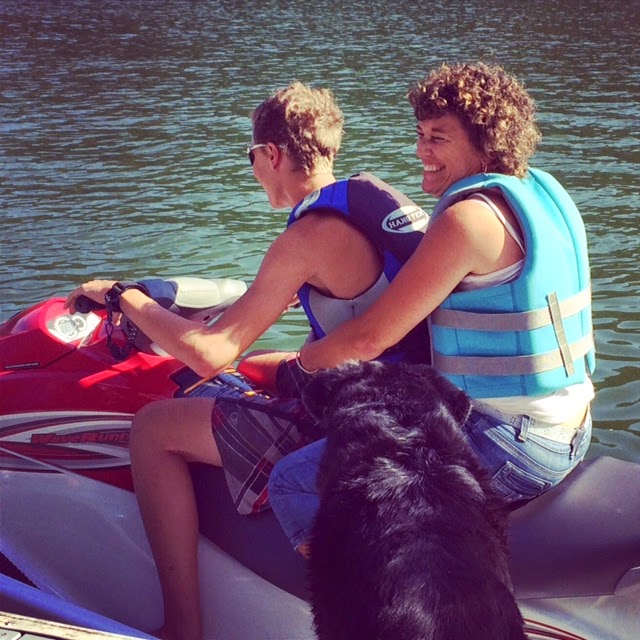 Finally my son asked me to try it. I'm a huge sissy with a fear of speed and didn't want to do it. So my son offered to take me. He promised to "go slow," but as soon as we were away from the dock, he punched it. You could hear my screams all the way down the lake, but his laughter was priceless.

He had nothing to prove to me. Except that he could scare the living crap out of his prissy mom (which he did.)

My son and I have had some pretty rough conversations over the past couple of years, and I've painstakingly learned how to listen more and lecture less. This has opened up a whole new aspect of our relationship. I've stopped putting my "mom mind" in the forefront, and just started listening to him as a young man - and yes, bloodying my lip in the process sometimes. Because he wants to talk. He wants to be heard. And he knows that no matter what he says, I'll still love him. Even if I don't agree. Even if I think he's wrong. And yes, even if it scares me.

I didn't realize he knew this until my new friend brought it to my attention. It is by the grace of God that she has been put into my life. We are in similar situations, and she has had more hardship than I, I am sure. In an hour of conversation, she changed how I look at my son and how he feels about his mom and his dad.

Basically, we both have our roles. His dad's role is to lead. To lead by example so that when my son strives to prove himself to his dad, he does, and is yet still challenged to be the role model that his dad should be for him. And maybe that means that dad gets the cool ski trips, and the endless talks about cars and motorcycles. Maybe that's why when things get a little too real, my son clams up or his dad just walks away.

My role is also to lead by example, and I try to, but it's also to sit on the sidelines, quietly taking notes. To observe all that is going on, file away my opinions and "what's best" and only bring those out if asked. My role is to listen and love unconditionally. My role is not to judge, but to let my son know that he can tell me anything, no matter how much it hurts me. That's my role. Why do you think when the cameras turn to all those football players they say, "Hi, Mom!" It's because we're on the sidelines, being the biggest fans of our kids.

And you know what? For the first time, I'm OK with that. I get it now. I have to stop comparing my relationship with my son to his dad's. We both have our place in his life. And like I told my son before, when he used to play his dad and me against each other, "You're lucky you don't have two parents like your dad or two parents like your mom. You got one of each."

Heaven is for real - but what about purgatory?


My son has become very interested in Heaven lately. Perhaps it was the book he read, “Heaven is for Real.” Maybe it was seeing the movie by the same name. Maybe it was the passing of his beloved grandmother a few months ago. Whatever the reason for the sudden spike in questions, he’s interested. 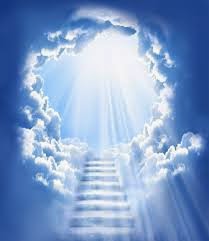 It never really occurred to me that there wasn't a Heaven. I know not all people believe in it, and that’s fine, I suppose. But I just don’t know how you could live on this earth and in this life and watch people move in and out of it and NOT believe that there is something on the other side.

I guess I just assume it’s there, up in the sky, beyond the clouds somewhere. I mean, I know it’s not technically THERE. I know we humanize all this stuff we can’t explain so we can attempt to logically wrap our brains around it. Maybe that’s why some people don’t believe – because they can’t rationally explain it. And if you can’t rationally explain it, it can’t exist, right?

One of the worst moments of my life was walking into the hospice room where my mom lay, minutes after she had passed away. Of course the normal reaction is to take her hand, which I did. But I didn’t necessarily need to. I knew she wasn’t there anymore. Same at the visitation. That wasn’t her. “Her” was gone. And I was completely convinced that she was looking down on us already, probably pleased that her hair and makeup looked so nice and we had picked out an outfit that complemented her skin tone. It just didn't really occur to me that she was in this kind of "holding cell" somewhere waiting for the green light to move along.

I was raised Catholic, and I knew about purgatory. It was my understanding that if you were a good person but did some bad things, you might go to this limbo place until at such time God decided that you were “good” enough to enter the Pearly Gates. I guess it didn’t occur to me that EVERYONE would go there. I thought it was just for maybe criminals that had done bad things then reformed, or maybe it was kind of like Santa’s “naughty” list, where you may get coal one year but the next you get that shiny new bike you’ve always wanted.

One day my dad mentioned that Mom was probably hanging out in purgatory – that she wasn’t in Heaven yet. I’m not gonna lie – this caught me off guard. I guess I just ASSUMED Mom was already in Heaven. And if there was a purgatory that she had to endure, it would have been the six weeks in the hospital, the six months in the nursing home and the five weeks in hospice for God’s sake. She lived a good life. She lived a Christian life. And she fought through the last year like a champion. Purgatory? Um, I don’t think so.

According to Catholics, there is a purgatory. The Catechism of the Catholic Church defines it as a "purification, so as to achieve the holiness necessary to enter the joy of Heaven," which is experienced by those "who die in God’s grace and friendship, but still imperfectly purified." It notes that "this final purification of the elect . . . is entirely different from the punishment of the damned." I guess it’s technically never really mentioned verbatim in the Bible, but “alluded to,” which, of course, is open to interpretation, which Bible readers love to do (and rightly so.) 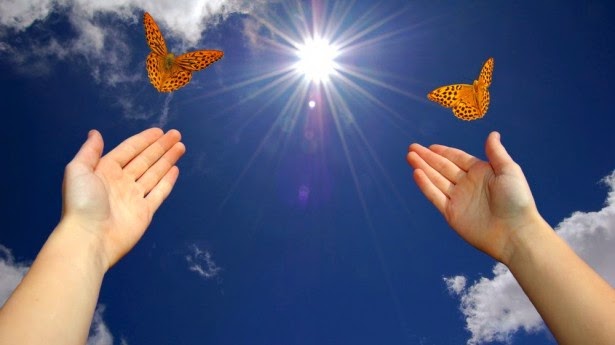 I guess what it comes down to is this: I gotta believe what I gotta believe. And I gotta believe that my mom is in Heaven. Why? One, because I think she served her “time” here on earth – even though that decision is obviously not up to me, and two, because I obtain an enormous amount of comfort in knowing that she is looking down on my children. I feel that so much that it just has to be true. And when my son asks me questions about Heaven and purgatory, which he does frequently these days, I'll tell him exactly what I think.

Posted by Amy Talcott at 9:28 AM No comments: