It's been six months, Mom.

Half a year. When I go back and look at my pictures, which I cherish, the dates are still measured in weeks. 26 weeks.

Some days it seems like just yesterday; other days it seems years ago. But what doesn't change is how much you're in my thoughts. Some days it's a fleeting moment. Most often when something interesting, accomplished or bumming happens and I think, "I gotta call Mom and tell her..." only to catch myself and realize that I can't. Not anymore. Not like before, anyway. 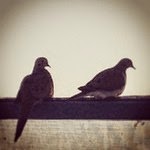 Other days, it's those signs. I've determined that any time you come into my head, whether it be something I think or something I see, that's your sign. For me, it's seeing or hearing that singular mourning dove who likes to perch on the top of the trampoline. Mourning doves mate for life, and I always see them together. It's been only since you passed that I see one alone. Other times it might be when I see someone who resembles you. Or I catch myself watching one of those commercials for the Carol Burnett video tapes. :)

The other day I went to visit you, and told you I really needed to know that you were there and watching out for the boys. In my heart of hearts I know you are. Sometimes I wonder if that's why you left when you did, because you knew I needed to know that someone was watching over that precocious grandchild of yours. You know which one I'm talking about.

The day you left us we had a snowstorm. Odd for the first of March. It was a Saturday, and we had all done our normal Saturday hospice visiting rotation that had somehow just fallen into place over the past five weeks. I spent the late morning and early afternoon by your bedside, reading. Dad came later, as he usually did, after going to ReStore. He was going to go to church that evening and Chris and I told him not to come back because the roads were getting bad.

I debated making plans that night, but decided to stop back over and see you instead. In true Dad fashion and against his kids' "suggestion" that he stay home, he braved the snowy roads and showed up after church. Logan was at a friend's house but I had decided not to let him spend the night, and around 10:00 he started texting me asking me when I would be there to pick him up.

It was so snowy, but for some reason, Dad and I stayed later than usual. I asked the nurses if we should stay because you were just so unresponsive and they said no, they didn't see any change to warrant it. Funny how your language sidesteps the real question. To this day I still can't ask it.

I knew I had to get Dad home. It was an unspoken rule among us kids that the last one at hospice was to make sure Dad went home. We left there at 10:25, because I remember telling Logan I'd be there by 10:40. Dad kissed you and told you he loved you, just as he had every single night. I told you the same, but instead of my normal, "See you tomorrow," for some reason I said, "Get some sleep." We walked out and I turned to look at you. I'll never forget it, and I'm glad I did. You looked peaceful, with those two battery-operated candles I brought for you flickering against your face as you slept under that fleece Chicago Bears blanket. As we walked down the hall, Dad said, "This is gonna be tough." I linked my arm in his and we walked out into the snow.

I never want to have that feeling again, though I know I will. That's all I can say about that.

I have to believe you see this. I have to believe you are there and seeing my boys grow and protecting them and being their guardian angels. You must. I can't think of anyone better for the job than the Man himself. I know you're watching over Dad when we can't, and I know you are with him as he struggles to live his life without you. He just loves you so very much. But you know that.

It's been six months, Mom. I miss you so. Keep showing up, OK? In my thoughts, in the mourning doves, and wherever else. Remember I told you to promise me? And I know you'll be creative about it. I'll be looking. I promise.