For those of you who read me, you may be sick of my posts about my mom. So I'll add a caveat to this one: it's a post about my mom. Writing - it's how I deal. And in dealing, sometimes I strike a chord with others versus irritating them. Sometimes, I even make others feel as if they're not alone in their own feelings. That's the bonus. Mostly, though, it's how I deal. 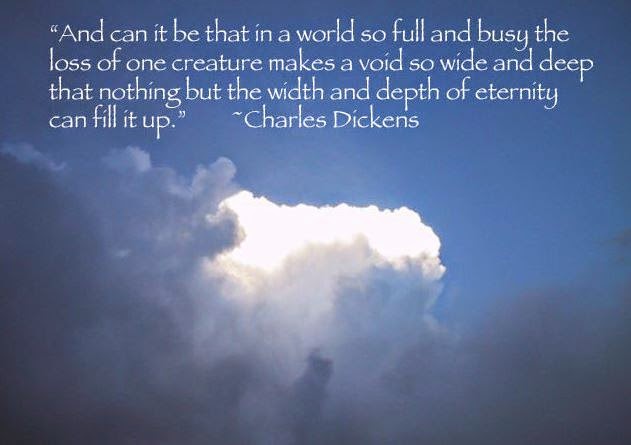 I know there are plenty of people who don't have one or more parents here anymore, and they survive just fine - at least on the outside. I'm not sure how they do it - they must be able to cover it better than I can. Or maybe the fact that I don't really have that partner to share sorrows and joys with makes it harder. I'm not sure. I know everyone at some point goes through this and survives. We all survive. But I guess I just didn't realize there would be such a void. Such an emptiness.
Not all the time. But a lot of the time. Still, after a year, Mom, my brain automatically thinks to call you to tell you something good (or bad) that's happened. My heart tells me to talk to you about something I'm struggling with, or to ask for parenting advice. My subconscious tells me I haven't seen you in awhile and I need to stop by with some soup or cookies or something and see the new outfit you got at some ridiculous sale price.
I never realized how great of a space you filled until you were gone. I never realized how much peace you gave me just knowing you were there. You and Dad took such good care of each other that my biggest worry was, well, what happened a year ago. I never worried that there was enough food in your fridge. Now I look and it's virtually empty, except a few random containers of stuff someone has brought over that are probably long overdue for the trash. Not that Dad doesn't shop and cook - he does - but not like you did - he'd even admit that (though he did do you proud with your homemade pea soup.) Of course the house is spotless, just like you left it. Your clothes? We just can't. None of us are ready. After a year, no one, especially Dad, wants to see your empty closet that once housed a veritable treasure trove of you fashion finds.
Not that Dad isn't fine. He's fine - I mean, relatively speaking. In fact, I'm pretty darn proud of and impressed by him. He's keeping busy and volunteering and helping out all the neighbors just like you know him to do. He still takes care of me like he always did, and I try to take care of him like I promised you I would. He's going on his walks and taking care of my dog and we go out to dinner and he comes over for dinner and I bet he'll be at most every one of Logan's track meets he can over the next few months. (I wish you could see Logan run. He's so fast. You'd be so proud.)
I've said it before, Mom. The only thing worse than missing you is watching Dad miss you. I'm glad he likes to talk about you. So do I. I love hearing stories about you two that I'd never heard before. We joke when things happen around the house it's you're doing. It's a half joke - I'm pretty sure it could very well be your doing. (Thanks for helping him find his checkbook, by the way. Now if you could tell us where your fancy canister set is I think he'd sleep a lot easier!) But it's quiet over there. And as busy as he keeps himself, I catch him missing you. I see it in his face. I know every single day is hard for him at some point of the day. And that tears me up, especially since I know he says "that's not how it was supposed to be." I know how I miss you, and I can only imagine what his missing you is like. And there is nothing I can do to take that away from him. I told you I'd take care of him, and I'm doing my best - I really am. And I really do love having him around. But my sadness doesn't hold a candle to his, and I know how great mine is.

I know I put a lot of stock in getting past this one year milestone. I don't know if it will get "easier" per se. Grief - or whatever it's called at this point - seems to come in waves for me. I'm fine for awhile, then something happens and I realize you're not here anymore. My mother. Every time I realize that it's like I'm realizing it for the first time.

I know you see us. I know you're sending us signs. I know you're at peace, and that gives me peace. I know how proud you will be when you watch over that precocious grandson of yours as he graduates from high school. I can almost hear you yelling, "Hallelujah!" Just please always make me feel that way - that you're still there. Because if I didn't have that to hold on to, I  wouldn't have much else.

Thank you for being my mom. I was damn lucky. Thank you for calling me your Sunshine. I'm not sure I ever lived up to that, but it always made me feel special. You'll never know, Dear, how much I love you. Wish you hadn't gone away.
Posted by Amy Talcott at 8:24 PM No comments:

Labels: death of mother, grief, hospice, loss of mother, missing mom, you are my sunshine

You can say you don't believe in God, but don't tell me He doesn't exist.


This has been kind of bugging me lately. For some reason - maybe it's the prevalence of social media - it seems to be a "thing" to spout off that there is no God and that He's basically for all those people who don't quite understand science.

What triggered this post was the social media response to an article posted on NBC's Facebook page about a 14-year old boy, and the cousin of a good friend of mine.

A Missouri teen  and his friends were playing on some thin ice about a month ago when it gave way and they fell through. Two of the teens made it to safety. However, one of the boys was submerged for more than 15 minutes and had no pulse for nearly 45. In the ER, he showed no signs of life and his body temperature was 88 degrees. It wasn't until his mother came in and started praying loudly that his heart began beating again. Just last week, the 14 year old walked out of the hospital with normal brain function.

His family called it a miracle. The doctor who treated him called it a "bonfide miracle." The response on social media was mixed at best. Among those who praised the doctors AND God were those so incredibly quick to tell everyone they were wrong.

"It's not a miracle, it's science."
"Too stupid to understand science? Try religion!"
"Did god appear? how about jesus or moses or mohammad? no? then it's no miracle."
"Let the god b.s. begin."

First of all, I understand everyone has their right to free speech. It's abused to the nth degree nowadays, but it's there. I get it. What I don't get is where people get off telling other people they're WRONG in what they believe.

See, it's OK if you don't believe in God. I have friends who don't believe in God. I love them very much, and I hope they love me back. I have a child who proclaims himself to be agnostic. This doesn't thrill me, but I accept it and I don't tell him he's WRONG. Nor do I tell my friends they're WRONG. It's what they BELIEVE, for God's sake, I need to respect that as much as they respect my beliefs.

So since this is my blog and I have the floor, here's what I believe.

I believe that the reason that bad things happen to good people is not because God has some twisted sense of humor. I believe God allows a natural order to some things, however horrible, however unfair. Can I explain why children die from diseases? Can I explain why hostages are beheaded and burned? Can I explain why innocent people suffer and starve and hurt and die?

I can't. But that isn't where you're going to "catch" someone who believes. And here's why. I believe that God is so incredibly transcendent that there is no way on this Earth and in our human brains that we will comprehend His Plan, or His order of things, or why He does what He does or doesn't do what He doesn't do.


I have FAITH. I have Faith in Him that He is all knowing. I TRUST He has a Plan for me. I TRUST He is watching over my children. That TRUST allows me to sleep at night. I PRAY to Him to give me more strength, more trust and more hope. He is HOPE. If I didn't have hope, I would have nothing.

Hope allows me to get up in the morning. Hope keeps me going during the day. Hope sometimes literally keeps me ALIVE.

Here's my point. For those of you who don't believe in Him, I will never, ever tell you you're wrong. You believe what you believe. I respect that. I'm not you, I don't live your life, I haven't experienced what you've experienced nor was I raised in your belief system. It is not MY call to tell you what to believe. In turn, it is not YOUR job to tell me my beliefs are wrong, especially if I can't "scientifically explain" them. DON'T YOU SEE? I'm OK with that. And it's not because I don't understand science so I chalk it up to religion. It's because I have FAITH.

People. Be kind to one another. Respect one another. You have not walked a mile in each others' shoes. Don't demean yourself by trying to put someone else in their place for what they believe versus what you believe.

I'm going to leave you with this quote. It's from Pope Francis, who is probably the first religious leader that has appealed to more people of all beliefs than any other. In fact, I dare say he gives religion a good name. And it is this:

"Since many of you do not belong to the Catholic Church and others are non-believers, from the bottom of my heart I give this silent blessing to each and every one of you, respecting the conscience of each one of you but knowing that each one of you is a child of God."   -Pope Francis
OK, he throws in that last part, but he doesn't shove it down your throat, right? I mean, COME ON. If the freakin' POPE can have that kind of respect, WHY CAN'T WE?

Posted by Amy Talcott at 9:48 PM No comments: