Well, not the actual date part, per se. Though I've had a few of those that did, in fact, make me cringe and wish I had made a pact with a friend to call me with some pretend emergency if I text her the right code word. The feeling may have been mutual.

I like fancy dresses. I can certainly live WITHOUT a fancy dress. I'm not spending an inordinate amount of time searching for a fancy dress. But if I happen to walk past a rack of fancy dresses and one jumps out at me and it fits perfectly and hugs me in all the right places and the color complements my skin tone and I feel just AMAZING in it, then sure, I might in fact buy that fancy dress. And sometimes, I browse through the racks of fancy dresses even if I don't plan on buying one. You know, just for fun.

In the meantime, though, I'm kind of just keeping my eyes open for something that fits me OK and that doesn't require a lot of special care and maintenance. Kind of like a wash-and-wear, no-iron boyfriend.

Here's the thing. Over the years, I've come to put "pre-dating" in the same category as shopping for a bathing suit. I seem to learn the hard way what styles are NOT me and what cuts DON'T fit, leaving me exhausted and just wanting to put my sweats back on, lay on the couch and eat a carton of ice cream.

1) If you're "my age," you'll probably meet someone via unconventional means. I've only been picked up once in a bar - and I was married to him for nine years. I had a four-ish year relationship with a man I met online. I had one date with a guy I met while walking my dog. The latest was a gentleman who approached me in a grocery store. We went out a few times before he bailed because he thought our futures were too different.* 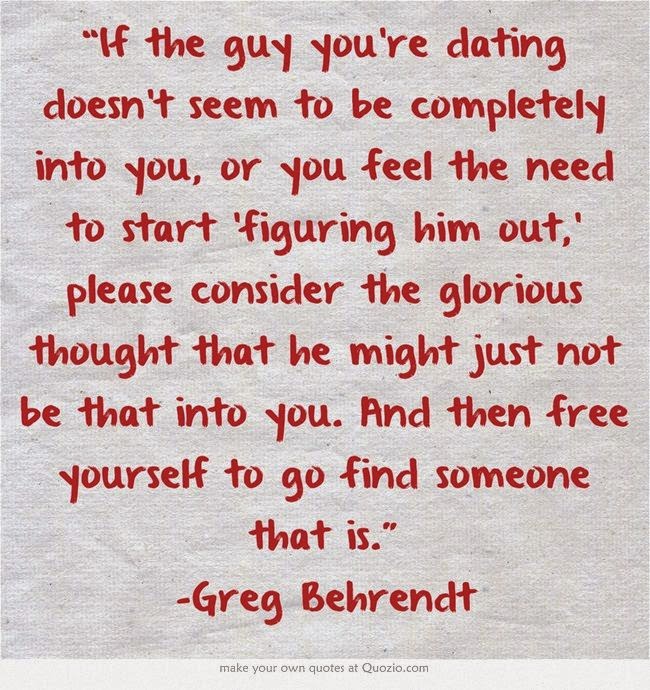 *Don't think I just fell off the turnip truck. Years ago, after a particularly bad breakup, I read a book that might sound stupid but it's been my mantra ever since. "It's Called a Breakup Because It's Broken: The Smart Girl's Break-Up Buddy" was essentially a manual for getting over being dumped. And it was pretty simple. If a guy wants to be with you, he'll be with you. If he doesn't call, it's not because he's sleeping/lost your number/is visiting his sick grandma. It's because HE'S NOT THAT INTO YOU. So delete his number, block him on Facebook, do whatever you have to do so you don't turn into that whiny chick who wants to know what she's done wrong and why he isn't contacting you. I repeat. He's just not that into you. End of story. Don't be bitter. Just move on. (My trick is that I never put a guy's name in my phone. It's always just his number that pops up, so I just delete the texts and voila - he's gone.)

2) There is a certain group of men out there who have never been married and don't have kids. Initially I avoided these types because 1) I figured there was no way in hell we would have much in common and  2) There HAD to be a reason they hadn't ever gotten married, right?

What I've found is that everyone has their reasons, and the fact that they didn't get married or have kids isn't a reason NOT to date them, but it's definitely going to be more of a challenge. Topics about kids are only relateable if they have that cute niece or nephew whom they just adore. They've spent their lives doing things you were for the most part completely unable to do due to your commitments to your spouse and kids. And if you're still caring for kids, you're not going to be as available as he might be, which can be - not saying always - but sometimes a bone of contention. But, if it's the right guy, it can work, though it never has for me. 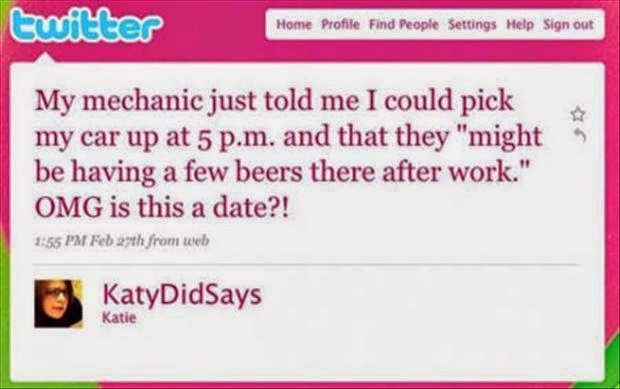 3)  The whole "going on a date" idea has become ambiguous. If you meet online, there's the idle chit chat back and forth. Then texts and maybe a phone call. Then possibly coffee or a drink. If there's a mutual "connection," there may be another night or afternoon out. Meeting anyone any other way is kind of the same thing. I can't remember the last time a guy actually said, "Would you like to go out on a date?" I know it's old fashioned. But what's so wrong about it? Why do we do all this "pre-dating" and when does it actually BECOME dating?

The new phrase now is "hanging out." "You want to hang out sometime?" I always want to say, "Sure - I'll meet you at the gas station - get a six pack and we'll sit out back and smoke some cigs." And I get it - you don't want to say "date" because that could be implied as "commitment" and "hang out" is nice and safe. Because what if you just want to be friends? Do guys really LOOK for that kind of thing? The friend thing? I have guy friends, but they're usually husbands of girlfriends of mine. I mean, I'm not saying it doesn't and can't happen, but I think it's more the exception rather than the norm. Let's face it - "let's be friends" is the kiss of death in any dating scenario.

Come on. If you're interested, just take the plunge and ask for a date. "Hang out" is a selfish way to say "I want to text you when it's convenient for me and I'm not sure how I feel about you anyway." That's fine, I guess, if both parties are on the same page with that, but it's rarely the case. If a date doesn't go well, all you have to do, really, is send a text that says, "Thanks but I don't think we're compatible." I promise if I receive that I will not stalk you or cry or be devastated. It's much better than having three "hangouts" and wondering what the hell is going on. (And I'm pretty savvy on figuring out if "hangout" is the equivalent of "let's have sex," and yes, I've learned the hard way that usually doesn't lead to dating or a long-term relationship. Yep, it's true.)

4) Games are stupid, I don't do them and I'm so over it if you do. I'm too old and too tired to play them. If you text me, I will text you back when I see it. I won't wait three hours in order to appear chill or busy. So if you want to call me after a date, don't wait three days so you don't seem too needy. Just call, for God's sake. I could die tomorrow - then how would you feel? Like you missed an opportunity to have one more date with me before I died, that's how you'd feel. 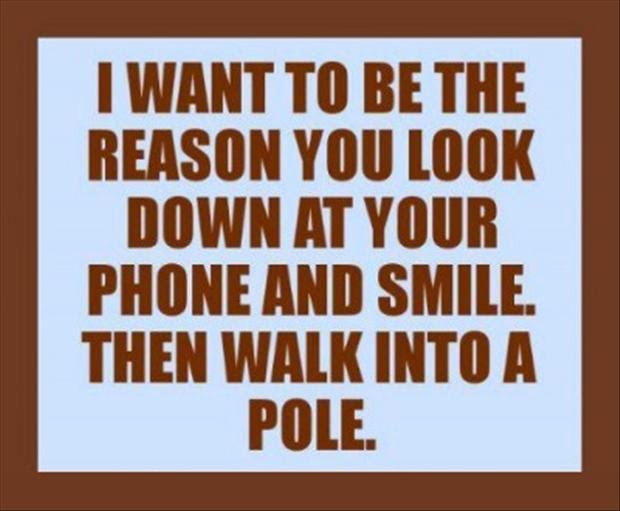 5) Just because you're "dating" doesn't mean you're on the road to marriage. Some may want this but not everyone sees it that way. Dating can mean going out to dinner on the weekends, seeing a concert, hanging out on the couch on a weekday night eating pizza and watching a movie, or even mundane things like shopping or working in the yard. Dating is enjoying another person's company. I guess the problem is that dating can lead to love, which is another topic all together. While dating is enjoying another person's company, love is more of wanting to be with that person even when you're not. And if one person is in dating mode and the other is in love mode, it can get tricky. I don't have any advice for that because it's been awhile since things have gotten that far.

Look, single people in your 30s, 40s, 50s and beyond. I know you may be jaded - everyone is to some extent. We've been around too long not to have some past mistakes and experiences cloud any new situation that comes our way. But at our age, everyone's going to have baggage - some good and some bad. If you can't handle it, exit respectfully. But if you think you want to stick with it, then I say just go for it. Life's too short to spend it alone (unless you really want to) and it's sure nice to have a Plus One every once in awhile.

With that said, I'll just continue to browse the racks and maybe someday I'll find that one "must have" that catches my eye and fits me in all the right places. Then maybe I'll buy it and wear it when someone finally asks me out on a date. Now wouldn't that be ironic?

Labels: dating, dating and marriage, dating in your 40s, dating sucks, dating tips, dating with kids, Greg Behrendt, hanging out, He's Not That Into You, it's called a breakup because it's broken
Newer Posts Older Posts Home
Subscribe to: Posts (Atom)