I gave my notice at my job yesterday.

I suck at change. And it takes me quite awhile to get comfortable in new surroundings. My current job is comfortable. I know what I'm doing. I feel confident in my abilities and and I truly enjoy what I do. Most of all, I enjoy the people with whom I work. They're genuine, fun-loving, sometimes crass (in a good way), real people who I have come to know and respect. It's because of them that I really like coming to work every day.

My mom always told me that when you have to make a tough decision, write up a list of pros and cons. I made that list, and the pros of taking this new job were way more numerous than the cons. The problem is, you have to assign a weight to those pros and cons. The opportunity to work for a company that was listed in the Best Places to Work in its industry is a pro. The job description sounding like something that's in my wheelhouse yet will allow me to grow is a pro. The compensation and benefits is a pro, as well as proximity to my home.

But, it's a con to be leaving these great relationships I've forged with some of these people, especially the core team with whom I work. It's a con that I'll be leaving (at least temporarily) the confidence to speak up in a meeting or take on a new writing challenge because I've been here long enough to know the ropes. It's a con (or maybe a pro, depending on who you ask) that with my son coming home I may not have the flexibility to be there for him in the way he needs. Funny how tangible the pros are, and how intangible the cons. That's why it's hard to give them the same weight.

My fear of change gets in my way a lot. I've gotten a lot better about it over the years, mostly since change seems to enjoy screwing with me. Just when I think I have my life where I want it, some monkey wrench gets thrown into the mix and BOOM. The relationship is ending. I'm moving. Someone's dying. A child is leaving. A job is changing. DAMMIT!

I know, I know. Life is all about change. "If nothing ever changed, there'd be no butterflies." "Your life doesn't get better by chance, it gets better by change." I know all the stupid quotes. I don't have to LIKE them.

I guess I've always just wanted to live a nice, ordinary life. One where I raise my kids in the same house for all of their young lives, work for a great company for years on end, am married to the love of my life for umpteen years and take a vacation to the family summer home every July. Spoiler alert: None of these has occurred. Yet.

Hopefully this change is good. Hopefully I can overcome my fear and embrace this new venture as my new future, a gift from God, a fresh start ... whatever spin I can put on it to get me through the first few months of not knowing what the hell I'm doing while maintaining the confidence that soon I will.

I do have a favorite quote about change - and it doesn't even have the word "change" in it. It's by Jon Kabat-Zinn, a pioneer in the theory of mindfulness, which, if you haven't even looked into it, is pretty amazing and surprisingly effective. Anyway, Kabat-Zinn said, "You can't stop the waves, but you can learn to surf." 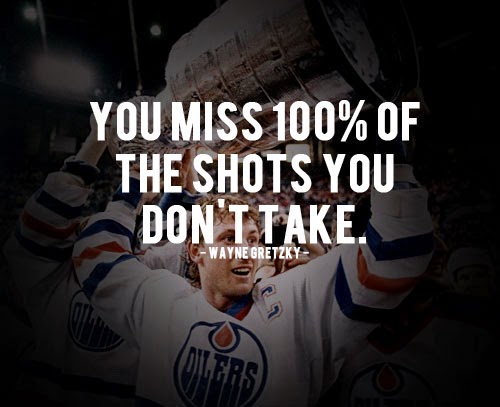 Most everyone has heard this obvious yet profound quote from the great Wayne Gretzky. I’ve used it before, as recently as yesterday. I was talking to a (younger) family member about some life-changing decisions and plans she was making that she seemed to be having ... not doubts, necessarily, but maybe some trepidation. Before I even had a chance to think, this is what I wrote:

“I love that you're taking this leap and I can say honestly and truthfully - from a 48 year old woman who has never done SHIT with her life because she was too worried about doing EXACTLY what was EXPECTED of her and MISERABLE at it all, you will never regret it, whether it works out or not.”

OK, so reading back on this, it may be a little dramatic. I’ve done some shit with my life, sure, and I haven’t been miserable about it ALL. I don’t know that I’ve necessarily accomplished anything earth-shattering to put my mark on the world, nor have my deeds been any greater than anyone else out there. But I have always suffered from living very much inside the box, based on what I believed were others’ expectations of my life - others being parents, community, and, well, society (and yeah, I know, the latter two probably really could not have cared less.)

I guess my regrets are that in some cases, I didn’t take any shots. In some cases, it didn’t even occur to me to do so because “I’m just not that person” or “I’m just not at that place in my life.” In other cases, it was fear of the unknown, fear of the unstable, or fear of failure. So in some ways, though I don’t have any regrets of things I have DONE in my life (except a few), I do have regrets about the things I have NOT done.

And just in case my kids read this, I don’t regret you. Not for a split nanosecond. My boys are, by far, my greatest accomplishment in life, and nothing could ever trump that. (And come to think of it, probably my most awesome adventures ever.) I don’t regret going to college or getting married. Again, this isn’t about regrets from past decisions. It’s regrets about decisions I never even considered.

And even as I think on it now, I don’t know what I would or could have done differently. It’s not like I was going to move to the mountains and write my novel while my kids were in grade school. I mean, I guess I COULD have. Yes, I COULD have. But I thought that living anything but a calm, stable, ordinary life like I had growing up would be selfish. I mean, I had a GREAT upbringing, and it was VERY ordinary. I WANTED that for my kids, or at least I did at the time. Funny how life works, though. Things happened to us over the course of their upbringing that were NOT ordinary, and I fought tooth and nail to right them back. Now that I think of it, at this writing, we are certainly NOT ordinary, but that is through situations that I suppose I could call adventures, though they weren't necessarily of my choosing. 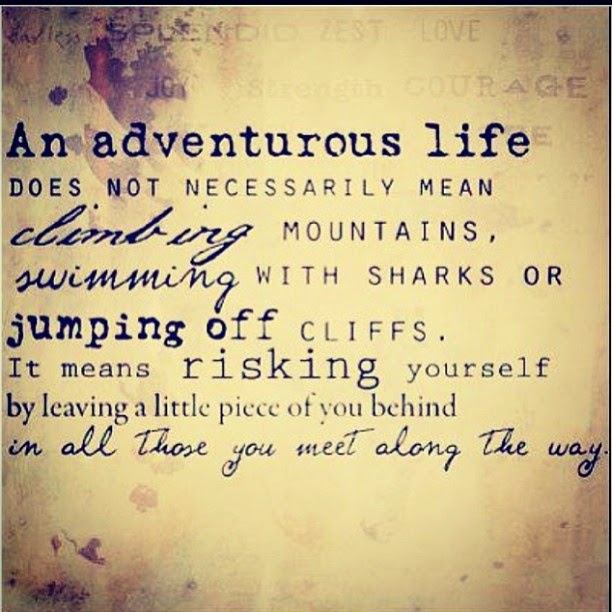 Adventures. That’s such a great word. I guess I need to stop thinking of them as these elusive, life-altering grand plans and more of situations where you just move out of your comfort zone.

I once knew a man who considered every unknown situation in his life as an “adventure.” He’d even tell his kids, “Today we’re going to have an adventure.” He’d have no plans, and they’d just go and do. And there was always some story to be told at the end of it. One night he was caught in a horrible snowstorm, and had to walk miles to get help. But he never recalled it as a horrible experience, but as a "great adventure."

I never forgot that, and I think about it often when I’m going into a situation of which I’m unsure, or if I’m faced with an opportunity that scares me. So I ended my “lecture” to my family member like this:

“This is an amazing opportunity, and if nothing else, you will have an adventure, and you will have it with someone you love. THAT IS LIFE RIGHT THERE, MY DARLING.”

I hope to have adventures - things that I choose to try that scare me but excite me at the same time. Maybe it is writing that book, or moving to a new location, or taking that trip I've made umpteen excuses why I can't take. Maybe it's as small as climbing that big rock or learning some new skill I thought I was too old to master.

Life in itself is an adventure, I suppose, because you never really know what’s around the next corner. But instead of checking to see if you’re wide open and are sure of the shot, sometimes you just have to take it. Otherwise, you’ll miss … every single time.
Posted by Amy Talcott at 7:54 PM No comments: