Suicide: I get it. And you need to, also.

A few facts before I get into my opinions:

• Suicide is the 10th leading cause of death for Americans.
• The highest suicide rate is among people 54–65 years old.
• Suicide is four times higher among men than women.
• The most common method is firearms (51.4%), with hangings/suffocation and poisonings coming  in second and third.
• In 2013, 41,149 suicides were reported. However, nearly 500,000 people visited hospitals for injuries due to self-harm (granted, not all may have been suicide attempts.)

It’s funny how we seem to be able to talk about suicide and suicide prevention more than we can talk about mental illness. Interestingly, the National Alliance on Mental Illness provides research that finds about 90% of individuals who die by suicide have been diagnosed with mental illness. I’ll bet there’s a pretty large portion who have NOT been diagnosed, however, but still suffer from it. That’s another discussion that has to do with the mental illness stigma, insurance coverage, and ease of getting in to see a professional for help.

People do this a lot. And it’s usually only then that they play the “Oh, he committed suicide. He must have had a mental illness” card. Oh, OK, NOW you want to talk about mental illness like you’re the expert. Got it. 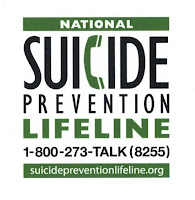 Fun Fact: Don't tell a despondent person, "I know how you feel - I was depressed once for a few days." Now if you suffered from depression or another mental illness and feel comfortable sharing, that may be helpful. But if you don't, don't cheapen their feelings by bringing up your bout with sadness.

Honestly? I get suicide. I truly get it. I get that there comes a point where you think that you just can’t go on for one more day. I get that you can get to the point where you can’t deal with one more obstacle or issue. I get that you can’t pretend to be OK at school or work or around your family or friends for one more minute. Because along with suicide comes that inability to TRY anymore – to do that good old “pull yourself up by your bootstraps and get on with your day” bullshit anymore. It’s impossible. Hell, sometimes you can’t even get out of bed. Then what happens? You feel like a lazy ass who is feeling sorry for yourself and you can’t call that friend you’ve called already 100 times because you’re sure she’s sick of hearing you whine and cry. So that light at the end of the tunnel that everyone tells you is there becomes dimmer and dimmer.

And then there are those amazing people who are living with horrible tragedies that would put most ordinary people in an early grave like the loss of a child or spouse, a horrible illness or disability or financial ruin. These are the people you admire so very much and assume that they are SO much stronger than you and that you are SO much weaker than them. And watching them overcome more than what you are dealing with makes you feel even worse for not being able to deal with your own seemingly minuscule problems that – to you – are just mountainous.

Fun Fact: Telling a potentially suicidal person that “things could be worse” is NOT a good idea.

For those who think suicide is selfish, I beg to differ. Nothing could be further from the truth. In fact, the person feels as if they are doing others a favor by leaving this world. They feel they are a burden. They feel as if they should be “getting better” but they’re not, so they withdraw even more because they feel powerless to do whatever people may be telling them to do to get themselves out of it. They don’t want to hurt anyone. They just desperately want their own hurt to go away, and they don’t see that happening. They understand that those who love them will mourn them, but also figure that in time, things will go back to normal and they will breathe a little sigh of relief that they don’t have to worry about or take care of that person anymore. This is how the suicidal person sees it.

So many who are left behind want to know why. What was SO bad in this person’s life that caused him to take his own life? I mean, there is nothing that could have possibly been in that person’s life that was insurmountable. In fact, some see suicide as the ultimate overreaction. 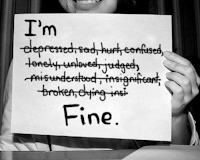 I respectfully disagree. Our feelings and reactions are unique, and the ways in which we cope and process our demons are as different as snowflakes in a blizzard. A suicidal person may be fixated on not fitting in with his or her peers – he may think everyone hates him and that he is completely unlikeable. To others, he or she may seem popular. A suicidal person may hate how they look to the point that they cover up every mirror in their home, but to others they may be considered attractive. A suicidal person may feel as if she cannot take one more obstacle and that life keeps dealing her blow after blow. Her peers may see her as strong and independent – able to deal with anything that comes her way.

Suicidal people become obsessed with whatever it is that is wrong with their life and become even more despondent as they see it not going away. They’ve lost the energy to TRY to make it go away. They feel as if they’ve lost the support to help it go away – even if they haven’t even scratched the surface of their support. Because on the outside, suicide is talked about as selfish. An overreaction. Failure to be able to cope. So why would a suicidal person talk to someone who is going to tell them about somebody else who has it worse? Or suggest they take walk? Or get a pedicure?

Fun Fact: Telling someone who is depressed to “cheer up” is like Rose telling Jack to do a few bobs in the water and he’ll feel a lot warmer while they wait for the rescue boat to arrive.

People are well-meaning, and I’m not blaming them. Because a well-adjusted person of “normal” mental health doesn’t think like a suicidal person. It’s almost like the suicidal person is missing that little piece that not only tells him that everything is going to be OK, but allows him to believe it.

Yes, there is counseling. But for many, it’s difficult to make that first call. To know who to call. To find a way to get to that appointment. To wait three weeks to be seen. Then there’s the stigma of medication. The cost of medication. But mostly the stigma. 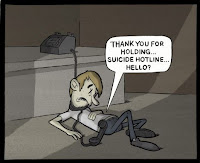 Then what’s left is the Suicide Hotline – which for many I’m sure has been the ultimate Godsend. For others – the act of picking up that phone and dialing that number is harder than committing the act of suicide itself. What are they going to possibly say to make me feel better? They’re just going to try to change my mind. When I hang up the phone, then where will I be?

I don’t have answers, but the first thing we have to do is end the stigma, get our heads out of our asses and start talking about this stuff. Quit pretending that it’s not ever going to happen to someone you know or someone you love. Start talking about mental illness and let’s give it the ticker tape parade we give to breast cancer prevention or Alzheimer’s, diseases that are much more readily “accepted” in our culture.

With everything going on in each of our lives, I know it’s hard to stop and sit down and make a phone call or arrange to meet a friend who you may suspect is going through it. It’s uncomfortable. You may not know what to say. Here are a couple of ideas:

“You’re right. This sucks.” Someone who is depressed or despondent doesn’t necessarily want cheering up, as counterproductive as that sounds. They want to hear that they are understood, and that their feelings are viable.

“I’m here if you want to talk” (walk, go shopping, get a bit to eat, etc.) Better yet, suggest a date and a time for a get together. Nothing big with a lot of people. Maybe there’s an art exhibit in town you know they’d like or a restaurant that has a special on a certain day. Make a date. For someone who is depressed, having something to look forward to – no matter how small – is crucial. Above all, do not cancel.

“You will not feel this way forever.” This may seem a little “Pollyanna,” but hearing this does give a despondent person hope. Hope that their feelings are temporary, hope that they’ll feel better, and that in a week, or a month, or a year, they’ll look back on this as just a point in time and nothing more.

“It’s not your fault.” Someone with severe depression hates that she feels depressed. She doesn’t know why she can’t bring herself out of this seemingly endless pool of quicksand. She knows that her issues aren’t the worst things anyone has ever experienced, but as I mentioned before, this only makes her feel worse. Telling her that you realize the depth of her sadness is not her fault - even if you don't fully understand it - releases an immense burden.

I know it’s uncomfortable to talk about. But I guarantee the other person is just as uncomfortable but may be more grateful than you can ever, ever image. So do it anyway. You never know what kind of lifeline – or life saver – you could be to that person.

Visit the American Foundation for Suicide Prevention to find out how you can learn, how you can understand, and how you can help.