For the past few years, I’ve written a blog on or around my birthday as kind of a retrospect as I plod through my 40s. Now that I’m kissing up to 50, it’s time to review my second-to-last year of my fourth decade. And as per usual, it’s been anything but usual.

I didn’t use “fine” in my title only because it rhymes with “nine”. I’ve found that “fine” has been my go-to word – as it is for many – that non-committal, non-controversial, non-conversation-inducing answer to anything from the indifferent, “How’s it going?” to the more interested, “How was your weekend?” to the landmine laden, “So, how’s your son doing?” “Fine” is safe. “Fine” lets everyone know you’re status quo. Nothing more to see here, folks. Move along. 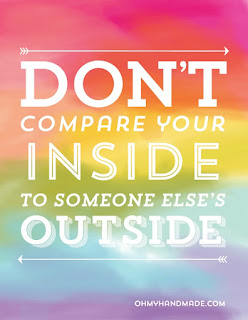 No one’s really “fine,” though, are they? I mean, everyone has their shit. That’s one thing I’ve learned in this past decade. “Don’t compare your inside to someone else's outside.” Of course, it also doesn’t mean when someone asks, “How’s it going?” you launch into a laundry list of things that are wrong in your life. (I know people who do this. Hint to those people: Start using “fine.”)

However, there is some real benefit to sharing at the right time. I’ve been told by quite a few people that my blog is “honest,” “raw,” “blunt” and whatever other words are a nice way of saying “I cannot believe you actually wrote that down for everyone to see.” But I’ve said it before and I’ll say it again. I don’t write what I write for sympathy or accolades. I’m not writing for the masses and I don’t want to be famous. It’s nice if people like what I write, sure. But what I LOVE – and what compels me to write every single time – is knowing that I can't be the only one – that SOMEONE out there HAS to be experiencing or feeling something similar. And nine times out of ten, that’s the case. I’ll get a private message or email from one person or several saying, “I’m going through the same thing!” or “Thank you for saying what I couldn’t say.” It HELPS people. It lets people know they’re not ALONE. And in this day and age of people texting versus talking and social media making it look like everyone’s life is perfect except yours, you need someone to say, “This is my shit. If you have the same shit, I’m with you. I get it. Let’s talk.”

So it seems ironic that I start this post by talking about being “fine.” I mean, I am FINE, generally speaking. I have a roof over my head, a good job and I’m healthy. I can’t complain that my basic needs aren’t being met. That’s more than a lot of people can say these days. But true to form, my life and the situations around me never seem to follow a straight line. I once referred to them as “God’s curve balls,” but now it’s more like God has one of those ball machines and he’s just pelting me right and left with them.

But the thing is, there’s this thing called “stigma.” And it’s rampant in our culture. “Stigma” by definition is, “a mark of disgrace associated with a particular circumstance, quality or person.” And unfortunately, stigma prevents a lot of people from talking. From sharing. From helping and healing. I am truly amazed at the people I have known – some I even had to release from my life – who were so judgmental about things they knew NOTHING about or had never experienced. And they were so ADAMANT in their judgment, too, so much so that I wanted to blurt out, “You’re an idiot and you don’t know what you’re talking about so just shut the hell up because you’re making a fool out of yourself.” But instead I said, “Well, if that’s what you think then that’s fine," all while cursing them under my breath. 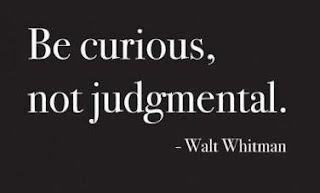 See, it’s not fine. We need to either stick to topics we know something about or come into a conversation open-minded and asking questions. It’s OK to do that in order to learn. When I was going to see my son for the first time in a long time, I asked an advisor how many questions I could ask him without seeming to be probing or judging. She said simply, "Be curious."

Be curious. What a novel idea. Talking to someone out of true curiosity to learn about that person or their situation is probably going to be better accepted than an automatic defensive opinion. And if after your curiosity is satiated you choose to accept or not to accept based on knowledge and (preferably) experience? Well, fine.

Just think of all the stigmas we have out there. Mental illness is a big one. Sexual orientation. Gender identity. Ethnicity. Religion. Absence of religion. Addiction. And many who are outspoken in order to educate people about a stigma are usually labeled as a blowhard, or an outcast, or misplaced, or abnormal, or odd (except by those who are sitting in the wings going, "Me, too!") Kind of like the Island of Misfit Toys in Rudolf the Red-Nosed Reindeer. See? Stigma against red noses. Sheesh.

Someone recently asked me, “Does it ever scare you to hit the ‘Publish’ button after you’ve written something?” I said, “Sure – every single time. But that’s when I know it’s good. When it scares me.” However, there are a few stigmas in my life that I can’t quite hit “Publish” on yet. Boy I sure want to. Because I know there are many, many people out there who could relate, and who I could potentially help. But I’m not ready. The past year has been full of quite a bit of judgment as I’ve navigated some unfamiliar waters, and I’ve found that the only comfort comes from those who are swimming in the same pool, not those who are sitting up on the deck. Those of us in the pool help each other – when one of us starts to go under, the better swimmers throw out a life preserver, while the ones on the deck just sit there and wonder how the hell we even got in the water in the first place. 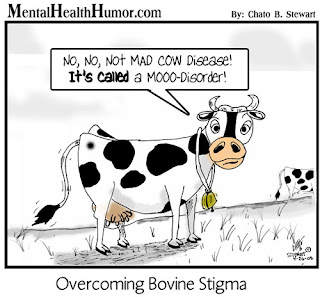 That’s stigma. And that’s what I’ve struggled with this past year. On the other hand, I’ve become an excellent swimmer. I became stronger this year than I think I have ever been, both physically and mentally. I’ve learned what I NEED in order to keep my head above water, but I’ve also learned that you may find that you’re treading water like crazy trying to keep someone else afloat thinking you’re saving them, when in actuality you’re both going to drown. And that’s when you have to say to that person, “It’s time you learned to swim.”

Here’s what I’m trying to say. Forty-eight definitely had it’s challenges – once again. But it was also a great learning year and a great growing year. I realized that my life is always going to be a little quirky, and I’m probably going to continue to find myself dealing with unique situations unlike many of my peers. But instead of trying to fight it and wonder why the hell I can’t just be “normal,” I’m embracing it, learning how to manage it, and offering flotation devices to anyone who might find themselves at the edge of the same pool.

Posted by Amy Talcott at 8:34 PM No comments: