Parents – A Word of Advice: Be Curious (Before It's Too Late)

Each year, one of the local high schools hosts a forum for parents entitled “Trends in Teen Drug and Alcohol Use: Helping our Teens Make Positive Choices”. The presentation is led by various law and drug enforcement personnel as well as a substance abuse counselor.
The first year I attended, I was pretty naïve. Not as naïve as maybe most of the other parents in the auditorium perhaps, who were thinking to themselves, “I’m just here as a precaution. Certainly not MY kid.” I, on the other hand, was more steeling myself, gathering as much information as I could in order to be prepared for what I hoped would not be as bad as the gnawing feeling in my stomach. However, I felt somewhat comforted by the fact that this high school had gone to such measures to educate parents. That must mean they are really on it, I thought.

Two years later, I attended the forum again. As I sat and listened to the officer, the drug enforcement director and the substance abuse counselor, I felt tears coming to my eyes. Not uncommon for me back then, but frustrating nonetheless. I had so many questions. I wanted so many clarifications. And I desperately needed help. When the principal was finished talking about the measures the school takes to combat drugs among the students, I thought, “It’s not enough. It’s not nearly enough.” 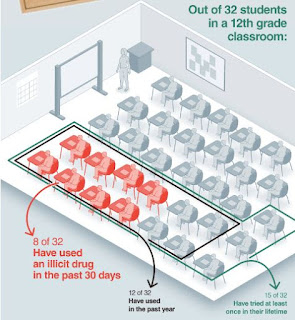 It’s been two and a half years since I attended my last drug forum. Last week, I caught the tail end of it - just in time for the Q & A. I was impressed with the multitude of parent questions and their interest and desire to educate themselves. This handful of parents would be way ahead of some of the others who didn't show up because they were sure that drugs would never be a problem with their kid.

The likelihood of developing a substance use disorder is greatest for those who begin use in their early teens. For example, 15.2 percent of people who start drinking by age 14 eventually develop alcohol abuse or dependence (as compared to just 2.1 percent of those who wait until they are 21 or older),8 and 25 percent of those who begin abusing prescription drugs at age 13 or younger develop a substance use disorder at some time in their lives.9

To the parents who attended the drug forum, good for you. To those didn't attend only because they think, "Not MY child", I have this to say to you:
LISTEN UP. Your blond haired, blue-eyed captain of the football team? It can happen to him. Your vivacious, perky cheerleader? It can happen to her. Your quiet, reserved, rule-following momma’s boy? It can happen to him. Your straight-A student? It can happen to her. NO ONE is immune to this.
Some parents think, “I know where my son is and what he’s doing and where he’s going and he tells me everything.” or “I don’t really know what my son does but CERTAINLY he’s not involved in THAT stuff.” Because “that stuff” only happens to dumb, no-good, scruffy kids from the wrong side of the tracks who have bad parents. Right?
No it’s not. You know who it happens to? Smart kids, like your straight-A student. Good kids, like your momma’s boy. Athletic kids, like your football player and your cheerleader. As well as all the other kids – the loner, the nice guy, the nerd, the bullied, the unaccepted, the promiscuous, the prude, the outgoing, the shy and the just average.
See, it doesn’t matter how smart or athletic or popular your kid is. What matters is if he has the tools to say no. If he has the confidence to walk away. If he has the maturity to understand that even a one-time bad decision could lead to a very, very rough life. 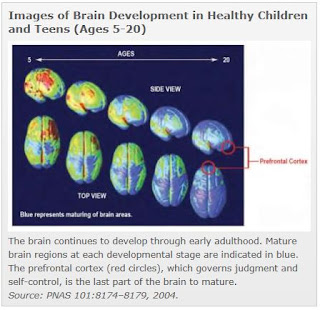 The immature brain, already struggling with balancing impulse and self-control, is more likely to take drugs again without adequately considering the consequences.4

The prefrontal cortex is responsible for assessing situations, making sound decisions, and controlling our emotions and impulses; typically this circuitry is not mature until a person is in his or her mid-20s. So our teens' brains just haven't fully developed, plus everything they are doing in high school is a "first". That’s where the parents come in.

For GOD’S sake, parents, be present. If you both work, try to be home in the evenings and engage with your teen. Know who he or she is hanging out with. Best case scenario, know your teen’s friends' parents. Knowing the parents gives you another pair of eyes and ears, and that’s invaluable during the high school years.

Understand that whatever you know about your teen, there is more you DON’T know. With some, maybe that’s not such a big deal. With others, it is. So if you suspect something’s going on with your child, don’t brush it away like an isolated incident. Investigate it. Ask questions.
Know some of the signs that your teen could be in trouble. Sure, some of it may be basic, teenage angst. But some of it may not be. Here are some of the signs your teen may be using drugs and/or alcohol:
-Decline in academic performance
-Getting into trouble at school
-Personality changes
-Withdrawal and decreased interaction with good friends
-New friends and people whom the teen is unwilling to introduce to you
-Excessive sleeping
-Weight loss or decline in eating
-Money missing from your purse of wallet
-Use of incense, room deodorizer or excessive perfumes and cologne
-Excessive use of mints, mouth washes and gum
-Eye drops to reduce redness
-Missing medications (over the counter as well as prescription)
-Over the counter materials such as computer duster, nail polish or nail polish remover, white out, hairsprays or other inhalants found with their belongings
-Drug paraphernalia such as pipes, bags of seeds, rolling papers, empty bottles, baggies, etc.
-Adamant about parents staying out of his or her bedroom
-Involved in legal trouble

Now, here’s the other side of the coin. You may be of the opinion that dabbling in drugs and/or alcohol is a teenage rite of passage – and for many it is. If you’re lucky. Maybe. And maybe you’re of the opinion that if your teen keeps his grades up, his room clean and his hair combed then you’re cool with it. That’s your prerogative. There are plenty of people in this world who recreationally use drugs and drink alcohol and swear it has absolutely no negative impact on their lives. I can’t speak for those people. All I can say is when it comes to teens, it’s a slippery slope. And it is a problem.

Tobacco, alcohol, and marijuana are the first addictive substances most people try. Data collected in 2012 found that nearly 13 percent of those with a substance use disorder began using marijuana by the time they were 14.10
And the other thing you need to keep in mind, parents, is that magical age. Once they hit 18, you lose a lot of those parental powers. If their drug and/or alcohol use has gotten out of control and they turn 18, you can’t sign them in to rehab. You can’t make them go to counseling. In fact, there’s very little you can do except maybe call the cops on them. How many parents are really going to do that? 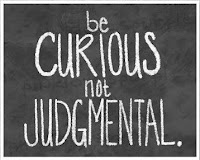 One of my favorite pieces of advice is, ironically, from a counselor at a wilderness facility. I was about to go see my son for the first time in a very long time, and I had so, so many questions for him, but I was hesitant to even ask him anything for fear of starting one of the many fights we had before he went away. Her response to me was, “Be curious.”

I have always remembered that. I try very hard to be mindful before I “interrogate” my child to make sure I phrase my questions in a way that’s not so intrusive. It’s easier and a bit less off-putting to start a question with, “I’m curious…” than “Where were you…” or “Why did you…”
No parent can guarantee that their child will not fall victim to drug or alcohol abuse. Drug use in particular is an enormous problem in our high schools today. Drug and alcohol addiction are diseases - yes, diseases - that can happen to anyone, though some individuals are more susceptible to addictive behaviors, whether it’s drugs, alcohol, pornography, gambling or shopping.

Compared with the general population, people addicted to drugs are roughly twice as likely to suffer from mood and anxiety disorders, with the reverse also true.1

If you notice those addictive tendencies in your child, or any mental health issues such as depression, anxiety, and yes, ADHD, I urge you to be extra vigilant. Intervene and reach out to the available resources to help your child with his or her illness as well as gain the necessary tools to combat the temptations if and when they come along. (Contact me if you don't know where to begin.)

In conclusion, let me say this. Yes, sometimes there is a fine line between "helicopter parenting" and allowing a child to experience his or her own consequences from poor decisions. I probably lean more toward the former than the latter, and have learned many lessons. But I'll say this as well: there are far too many parents out there today who continue to turn a blind eye toward an increasingly dangerous and deadly trend that is taking over our schools right under our noses. It's not only hurting our children, it's ruining their lives - and it's killing them.

Parents. Wake up. It can happen to your child. YOUR CHILD. Educate yourself. Talk to your teen. Be curious.

National Institute on Drug Abuse: The Science of Drugs and Addiction

Principles of Adolescent Substance Use Disorder Treatment: A Research-Based Guide

Secret life of teens: The dangerous drug parents aren't talking about with kids

Posted by Amy Talcott at 8:33 AM No comments: