First Day of the Next Four Years of His Life, Take Two


On August 17th, 2011, my oldest son embarked upon his four-year journey through high school. On that day, I wrote what I wished I could have told him (First Day of the Next Four Years of His Life) but didn’t dare due to the whole teenage angst thing he had going on.


Some of what I wrote I may have mentioned to him as I nervously tried to prepare him for what I could not prepare him for. However, no one could have possibly braced me for what those four years would bring – and that’s an understatement. My advice then seemed so normal, but what we experienced during that time was anything but.

So here I am – exactly five years later – same date, same high school, same nerves, different kid. At first I thought to myself, "My advice is the same – there’s no reason to write another post on this". But as I re-read that blog, I realized, no, it’s not the same. While my mainstream suggestions are still valid (keep your schedule in your pocket, don’t freak out if you forget your locker combination, respect your teachers, etc.) they’re not what first comes to mind now that I have my second and final child entering those precarious high school years.

Why? Couple of reasons. One, he’s a different kid. Thankfully, I’ve been able to keep the “Mom’s a complete idiot and I’d rather eat dirt than be seen with her” scenario at bay longer than I did with my first son, so I can talk to him about some of these things. Two, I learned too late that while I had the best of intentions, I tried too hard to save my son from every mistake or consequence or hurtful situation he might encounter. And in doing that, I did him a huge disservice.

With that said, my words of wisdom come not only from me, but from both of my sons: one speaking from first-hand experience; the other vicariously through his older brother. And while these nuggets may not be as “common” and “sharable” as my post five years ago, I can tell you right now it’s all pretty damn good advice.

From my youngest son:

“I’m going to have to choose my friends carefully.”

My youngest wasn’t immune to the changes his brother went through during his high school years, his struggles or his revolving door of “friends”. In his mind, these were the people who took his big brother away from him piece by piece, dragging him down into a life that ended up making high school a living hell for all of us. My youngest doesn’t want that for himself (or for me), and is pretty good at seeing the forest for the trees.

We’ve talked about choosing the friends who don’t make you feel bad, or pressured, or nervous about doing something that doesn’t make you feel right. We’ve talked about friends who use you, and that true friends shouldn’t make you feel like you have to make a decision that goes against that feeling in your gut. I never thought I’d be a little thankful for my son’s anxiety, but if nothing else, I hope it’s that emotion that helps keeps the bad influences away, as well as keeps him from being a bad influence, which I would be hard pressed to believe he would be. 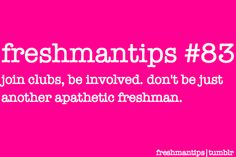 I wish I would have asked for a further explanation of this statement from my oldest, who begrudgingly completed a season of tennis before settling on a couple of weeks of working lights and sound for the school play as his completion of my rule that “You must join SOMETHING”. Perhaps it’s the nature of the school: it’s somewhat affluent (we are not), with a high participation rate in sports and extracurricular activities. Those who choose not to participate in either kind of fall into that “other” category you might remember from your high school days. And in a school like that, it’s a dangerous place to be.

The good thing is, my youngest started track three years ago. I saw he was good and enjoyed it, and I have “encouraged” him a bit harder than I may have with my first, for just this reason. It’s not that I want him to be a track star. I want him to be INVOLVED. I want him to feel a part of a team, and a community of other students. I want him held accountable for his grades. I want him randomly drug tested (as they do the athletes). I want him busy. I want him healthy. I want him as far away from the “other” category as I can get him, and I make no apologies for that.

And finally, from me, more of a wish than a piece of advice for the next four years:
﻿﻿

I don’t know why some kids push their parents away and others keep them close. I don’t know why some child/parent relationships are adversarial and others less so. Perhaps it has to do with the makeup of the child as well as the experience of the parent. I learned more than I ever wanted to learn during those four years with my oldest, but my experiences I feel made me a better listener versus advice-giver with my youngest. I try to ask him what he thinks he should do; not tell him what I think he should do. I am painfully aware that trying to shield and save him from every disappointment and crisis is only doing a disservice to the development of his coping skills he’ll need later in life.
﻿
I told my oldest he could always talk to me, and I meant it, but my desire to give him answers to questions he should figure out for himself, coupled with his oppositional nature, rarely made this possible. My youngest and I have some pretty amazing conversations, and at 15, I’m constantly impressed at the questions he asks and the topics he brings up. Will that continue into high school? I can only hope. Whereas now, I can feel the butterflies in my stomach as I struggle to find something non-confrontational to talk to my oldest about, I pray that my youngest and I can have as trusting of a relationship as a mother and her teenage boy can have.

Now I’m not naïve enough to think that he’s going to tell me everything – not by a long shot. I guess what I mean by “talk to me” is, “Don’t not talk to me because you don’t think I’ll understand, or that I’ll yell at you, or judge you.” I’ve come a long way and if he’s willing to keep me in the loop and open up to me, I’m willing to trust him which will translate into more privileges and freedoms that his older brother didn’t earn.

Despite my best intentions and most fervent prayers, my oldest son’s high school experience was downright brutal. The other night, he gave his brother some “advice” on how to get through those four years. Suffice it to say, it was more of a strategy on “how to get in and out with the least possible effort” as opposed to “how to get the most out of the next four years”.  And though certain aspects of high school are the same as they were 30+ years ago, I’m hesitant to dole out advice to him like I know what the hell I’m talking about today. But there is one thing that still holds true from five years ago; something that will never, ever change as long as I am living and breathing:

I will be there.

Not to fix things. Not to “save” you. Not to enable you. But to just be there.

When the girl says “yes” to your invitation to the dance, I will be there to help pick out your suit and her corsage.

When a girl breaks your heart and you just want to cry, I will be there with apple pie and a horror movie to help get your mind off of her.

When you and your friends need a place to hang out after the football game, I will be there with a comfy basement and plenty of snacks.

When you feel pressured by friends to do something you know you shouldn’t do, I will be there as your excuse to leave.

When you get an “A” on that project you worked for weeks on, I will be there waving a college catalog.

When you bomb that test that lowers your grade a full letter, I will be there, probably with a set of flash cards or something.

When you win that race with a personal best, I will be there screaming your name at the finish line.


When you lose and feel like quitting, I will be there to remind you that you run because you love it, not because you win.

The rest is the same – and I’m able to copy it (nearly) verbatim from that blog five years ago:

"I will be there. And I think you know that. I am hoping that these next four years will be some of the best years of your life. These will be the years you will learn - both academically, socially and emotionally. You will have amazing ups and horrible downs. You may fall in love. You may experience heartbreak. You may find the friends who will be your friends for the rest of your life. You may discover your passion and realize that it's what you want to do as a career. You may discover yourself - at least a little bit. And through it all, I will be there, walking 50 paces or so back, but there just the same."

Happy first day of freshman year, my son of the Class of 2020.

Posted by Amy Talcott at 9:24 AM No comments: