I took my son to the pediatrician today and got more than I bargained for.

So did he - other than the three unexpected immunizations.

My son needed a sports physical for track so it was just a routine visit. I commented as we sat in the colorful “Wave” waiting room with the tiny chairs, giant fish tank and cartoons on the TV that maybe it was time to move up to a “big person doctor.” (He agreed, but said he’d miss the fish tank.)

After the obligatory height, weight and medical history check by the nurse, Dr. Akerele came in to perform the physical. He was certainly personable, obviously intelligent and extremely observant. He asked all the basic health questions while quickly developing a rapport with my son, so much so that soon they were talking about school, friends, girls, teenager things, family relationships and even the future.

It's so interesting to stand back and listen to another adult ask my son about his future. I know he doesn’t have it all planned out – he’s 16, for God’s sake – but I’m always curious as to what he’s thinking – or if he's thinking – about life after high school. Right now, at least. Anyone with kids knows that the flavor of the month can change from fireman to astronaut to teacher to pilot to underwater welder pretty quickly. 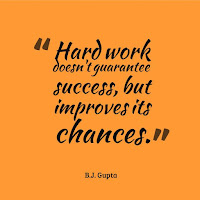 Right now my son says he wants to go into coding or music production. Having an older son who expressed interest in the latter, I feel as if I know something about what it entails to have music production as a life choice, and it’s a tough one. Coding, while a safe bet and potentially money-making, is pretty cutthroat and honestly not something I see my youngest doing day in and day out based on his personality and interests – but that’s not for me to decide, necessarily.

However, this concern was further validated when I talked to one of my good IT friends at work about what my son should be doing now to test the coding waters. “I suggested he dabble with some programs or games on the Internet,” I said, “just for fun to see if he likes it. I found a bunch of websites that I gave him but he hasn’t done anything with them.” His reply was, “If he’s truly interested in coding, he’d be dabbling in it right now. He’d be creating websites or trying to hack into some computer system. If he’s not doing that, chances are that interest is going to be short-lived.”

True or not, he had a point. I know many people find their callings by accident, or midlife, or later in life. But I would suspect that many had an inkling through their personalities and interests as to what they might do. Me? That was easy. I wrote a lot. Always. No-brainer. The kids who tended to every bump and bruise became doctors and nurses. The artists became graphic designers. And the computer geeks? Well, they did coding.

I know that’s stereotypical in some respects and obviously not true for all people but I’m speaking in generalities. If my son wants to learn to code, that’s great. I just get the feeling that it’s not going to be something he’s going to love long-term.

But I digress. The point of all this is to say that my son got quite an education today from a man who is obviously very smart and successful, but has had his share of hardships and has attained his success by hard work and lots of mistakes. And as successful as he seems to be right now, it sounds like he’s only getting started.

I’m going to fail miserably at trying to reiterate everything he said to my son, but basically, he showed him two sides of the coin: those who work hard for what they want and those who simply expect to get it. Those who push the boundaries and those who stay within them. Those who live their passion, and those who just get through to 5:00. 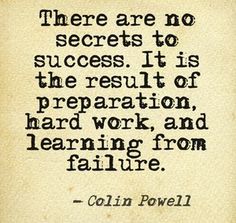 Other than the first one about expecting to get what you want, there are no wrong ways to be. Obviously he is a man who pushes boundaries. Already with a medical degree, he is now attending school again to learn to code; not because he wants to know how to code, but so he can understand it and talk to the individuals who will be helping him develop a revolutionary new healthcare app he’s working on. He and his brother have been in countless ventures together over the course of their lifetime, and told my son, “You know how many times we failed? Ninety-five. But that’s the only way we learned.”

My son, of course, wants to be rich so he can have all the expensive things. Doc told him, “It’s OK to want to be rich. But desire to be the kind of rich where you are successful four-fold: you’ve taken care of yourself, you’ve provided for your family, you’ve helped someone else and you’ve made the world a better place.” For instance, he said, “You’re interested in music. Find a way that musicians in third world countries can record and upload their music – share their music with the rest of the world.”

“If rich is your goal,” he said, “you’re going to have to think outside the box. You’re going to want to be the one who pays yourself versus getting paid. Do you want be your own boss or do you want someone else to build an empire on your bones?” (I’m not sure how I feel about what he said but I truly love the line about “building an empire on your bones” so I included it.)

Regardless of my opinion of everything this man said, I was transfixed by his speech. Here was a guy who wasn’t just talking the talk – he was walking the walk as well. He wasn’t telling my son what to do – he was telling him, based on his knowledge and experience, what he would have to do to reach the goals he had just vocalized. And my son was listening.

I was all in until he said, “…and you don’t necessarily have to go to school…”

Um … hey, doc. Ixnay on the no oolschay.

I’ve heard this opinion before, and I know to some extent it’s true. But having had one son not attend college because he “didn’t need it” and watching him struggle now, I really, really, really want my other son to attend if not college, a trade school. I believe in that very strongly.

I said as much and was relieved that the doc backed up his statement by saying that a four-year university wasn’t always necessary (as well as financially possible or reasonable) and that a community college or trade school could be a consideration. He told him, “If you want to go into coding, don’t major in it. Major in Business. Go to a community college for the first two years and get your core classes in business. Save that $40,000 a year. Finish up your coding at a university – a good university – as a minor, and you’ll know that, but you’ll also have a business degree that you'll use no matter what you go into, and also have it to fall back on if coding isn’t working out or paying the bills.”

He mentioned a relative of his who took over his dad’s plumbing business. “These guys attend trade school and make good money – there’s always a need. He took over dad’s business, expanded it to corporate plumbing and HVAC and is now extremely successful.”

Trade, business, entrepreneur. Nobody’s building an empire on his bones. 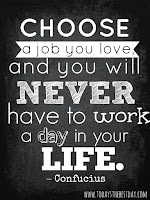 Doc mentioned that it was too bad that many people were not doing what they loved as their career. I told him I was doing what I loved, but unfortunately, the money never has been, never is and never will be there for me. He admitted that that was the case for some careers, and that other times, sacrifices for family and kids came into play. That must be my triple whammy right there, I said.

But in speaking about passions, I thought about mine –writing. Sure, I like my job, and I get to write every day. But my happy place isn’t in a cubicle in a building writing everything I’m told – it’s in an upstairs nook of an old house overlooking a quiet street typing up my fourth self-help or non-fiction book. It’s going into small bookstores for a reading or a signing and having people tell me that I helped them. It’s learning from those people and using them as inspiration and information to write more and more.

Is that my passion? Yes. Is that something I could have done five, 10 or 20 years ago? And jeopardize my own financial stability and time with my kids? No. In the future? Never say never.

But here was this man, this doctor, who didn’t know my son any more than his chart – and who wasn’t ME – telling him to grab the world by the balls while he can. I know I was listening – I think my son was, too. I hope it makes him think. I hope he takes it to heart. I hope when we are discussing college visits and his plans for the future that he remembers today – not only as he takes a step toward his future but in every step he takes from now on. What he thinks he wants is going to change so many times between now and, well, a long time. I want him to know he has options. I want him to know he can dream – but I also want him to know that the dreamers are also the workers – and he needs to be a worker.

Doc told my son it's important to learn from others - to find a mentor to talk to and to ask for guidance. This is something I always wanted for my oldest so it was everything I could do to not get on my knees and beg this guy to be my son's muse. But I resisted, thinking I'd talk with my son later about this conversation to see if it impacted him as much as it did me.

Our appointment was scheduled before school this morning, and my son was over an hour and a half late getting back. I honestly can’t imagine time more well spent, and I want to thank Dr. Akerele for stepping up – for being my son’s mentor – for telling it to him straight – and hopefully giving him some food for thought as he continues to dream and work toward his own life and his own future.

Posted by Amy Talcott at 4:05 PM No comments: