Recently, I found out a friend of mine's son had the capabilities to convert all those tiny videocassettes that had been gathering dust in my TV stand to electronic files. I jumped at the chance, thinking back to all the times I grabbed that monstrous camera and recorded every burp, fart and poop my kids did, usually narrated by me saying something brilliant like, "HONEY, LOOK AT THE CAMERA!!!!!"

I can't remember when we finally ditched the video recorder in favor of the cell phone, but I'm guessing it was around 2008, since that's the last little cassette I could find. Either that or I was just so damn tired I stopped chronicling anything at all.

Regardless, my friend's son soon sent me a link to gigabytes and gigabytes of precious memories, now firmly entrenched in some mega folder probably floating on the Cloud somewhere. 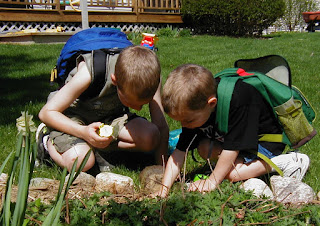 The files have just been sitting there in interweb space until the other day, when my younger son mentioned to me that he had been texting his older brother and waxing nostalgic about some good times he remembered them having together when they were younger. Apparently my oldest wasn't recalling the same sweet memories, and my youngest was understandably upset about it.

I knew there had to be some pretty awesome visual proof in those video files of mine, so this past weekend I took some time to start watching them.


You know when you start cleaning out a drawer or going through old files and it turns into a marathon of "Oh, I remember this!" or "Wow I had forgotten about that!"? Yep, that was me ... being sucked back in time for hours to a whole other life that I hadn't forgotten about, but just hadn't thought about in a long time. It was like video crack ... I just couldn't stop watching.

I'm not going to say "they grow up so fast," because I distinctly remember at the time there being many days that I was sure went on much longer than the 24-hour allotment. I remember sometimes wishing they'd hurry out of one stage or another ... naps, potty training, the terrible twos, the terrible threes, the terrible fours .... kidding ... sort of. 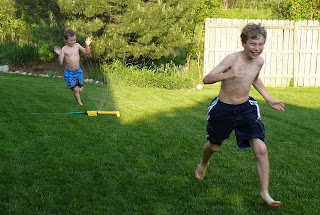 But looking at these videos, all that wistfulness for time to go by is gone. For so long, I've wondered if I was a good mom; if my kids had a good childhood; if I did things right and gave them what they needed when they needed it. In looking at these videos, I was validated. They were free-spirited, for-the-most-part happy kids doing regular stuff that free-spirited, for-the-most-part-happy kids do - nothing fancy. Giggling through the cold water of the sprinkler. Screaming "Watch me, Mom!" a thousand times as they raced their bikes down the sidewalk and over a ramp. Seeing who could go highest on the swings in the backyard. Chasing each other with water guns almost as big as they were. 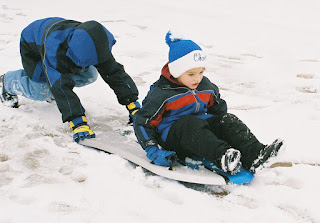 This is the stuff my boys need to see. These are the memories I want them to have locked in their heads and hearts forever. Though they may not be close right now, they are bonded by brotherhood, and they were inseparable and partners in crime for many years. I want my younger son to see what an incredible big brother he has, who almost hovered over him to help him read a birthday card, work a water gun or build a Lego set. I want my oldest to see what a great influence he was on his younger brother, and how much good he taught him along the way. They were and are both very lucky to have each other, whether now, at 16 and 20 years old, they realize it or not.

I want both of them to see that they were raised with no frills - most of the fun they had was in their own backyard, with things like a slip 'n slide made out of an old paint tarp, a bike race track traced with sidewalk chalk and games that came simply from their imagination. 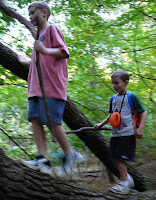 I also want them to know that their mom was right there with them - capturing these moments even though there were times when my youngest would yell, "DON'T PUT THE CAMERA ON ME!" I was actually struck by how calm my voice sounded on the videotape sometimes ... maybe it's because I knew I was documenting or maybe I had it together more than I gave myself credit for. I hear myself saying things like, "Now, Buddy, wait for your brother - that's the nice thing to do," or "Be a good example and let your little brother have a turn." My patience on the outside could not have possibly mirrored the parenting chaos that was taking place on the inside. 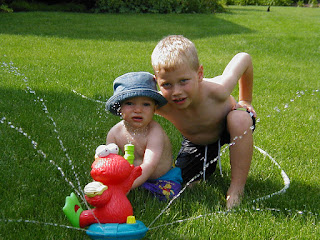 I guess I'm going to renege on what I said earlier and tell all you younger moms that while they may not grow up so fast, it does all go by so fast. It may not seem like it at the time, but I swear to God I look at these videos and I'm sure it was just the other day they were sledding down the neighbor's driveway like it was the steepest and fastest in the world. I look at all the close-ups I did of these cherubic little faces - their innocence as they sweetly answered questions like, "What's your name? How old are you? Can you count to ten?" How they sought me out when they were up on the stage for their spring program - singing all those songs and doing all those hand motions while looking slightly embarrassed but proud at the same time, then finally spotting me with a look of relief and happiness all rolled up into one sweet face.

Sure, I'm well aware that probably 90 percent of the videos are of the good times - and that's OK. There were plenty of bad times that are locked into my brain forever. I think sometimes those are the easier things to remember and we somehow forget how wonderful some of everyday life can really be to a kid.

In looking at those videos, my heart of course swells with love for them, but it also swells with pride, for them and for myself. I raised some good kids - I really did. I needed to see that, and so do they. I hope they already know how much I love them, and how much they love each other. But if "video evidence" helps, so be it. I know what we'll be doing over the Christmas break.

Posted by Amy Talcott at 7:29 PM No comments: