The First Day of Lasts

Everything I have known as a mother for the past 19 years has revolved around school.

The tears (from them) at preschool drop off. The tears (from me) on the first day of kindergarten. The first time I became "one of those parents" with my camcorder at (insert any school production here) frantically trying to get my kid's attention so he'd smile and wave at me (then mouthing at him to SING THE WORDS.) The first time as a "room parent" watching my kid beam when I walked in the room with cookies and juice. The first middle school project that had us at the dollar store at 8:30 at night to buy poster board because "someone" didn't remember. The first homework assignment forgotten and subsequently dropped off by an overprotective mom. The first homework assignment forgotten and subsequently NOT dropped off by a mom who was finally learning.

I'm a mere nine months away from my 20-year anniversary of being the mom of a school-aged kid, and I don't know if I'll ever be ready to celebrate.

It's not like their high school years were a scene out of Glee. Neither of my kids particularly loved high school the way I did back in the mid-80's. Part of that I believe is because I picked the wrong damn high school, and part of that was, well, I don't really know. Social media. Drugs. Pressure. Economics. Privilege. In fact, this is the first time I've had a senior at home - my oldest finished high school in another state, so my apple cart of firsts and lasts with him was a bit upset. Suffice to say I don't think either of them will attend any high school reunions. 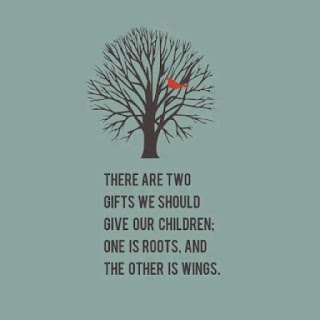 Still, it will be the end of an era for me. My oldest has entered the big, bad world of life and is attending the School of Hard Knocks. My youngest … I'm not sure where his path will lead right now. We're not exactly the kind of people who adhere to that classic perfect family Facebook post about how we're so proud of little Johnny for being one of 47 valedictorians and headed off on a full scholarship to Hahhhvahhhd. But lemme tell you, I'm just as proud of my kids for forging their own path, whatever that might be.

Me? I guess I'll soak it all in and roll with the changes as best I can. We've had some pretty major life changes over the past 20 years. Divorce. A move. Another move. Addiction. Mental health issues. Death. A life-changing accident. Cancer. We survived. I survived. So I can survive this - my baby in his last year of high school.

I once got a great piece of advice from an unlikely source. Back in 1997, I was pregnant with my first son and setting up for an event at a trade show in Dallas. I had hired a photographer who was a big, burly Texas man, complete with the cowboy boots and hat. We were talking before the event and the conversation turned to kids - his grown and mine still in the oven. What he said to me I'll never forget: "I always just enjoyed each stage; I never looked back and wished I could go back. I always looked forward to the next one. That's the key - just enjoy each stage."

That's hard to do. Though I don't know that I would want to go back and do EVERYTHING over again, I do get a tug at my heartstrings when I think about walking up to the school and having my kid run out to see me with his "smiley face of the day" paper clenched in his little fist. Or being home when my middle schooler bursts through the door asking for a snack and running back outside to play with his friends. Or when my high schooler sits down with me to watch Stranger Things even though I have no idea what he did during the day anymore.

The school "firsts" are almost over, but there are so many more firsts to come in these boys' lives. I won't be there for many of them - heck probably most of them - but I guess I'm not supposed to be. It's time to have some "firsts" of my own. What those are I'm not sure - I have a few ideas - and I'm looking forward to them, whatever they may be.

Here's to a year of "lasts" for my senior and me, and a lifetime of "firsts" ahead for us all.

Posted by Amy Talcott at 8:58 PM No comments: