For All You Young Moms Out There This Holiday Season 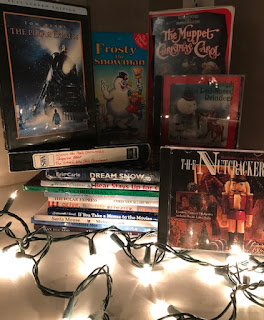 I was going through holiday decorations yesterday and came upon a battered, blue bin of holiday books, VHS tapes, CDs, and yes, even a couple of cassettes. As I looked through the home-recorded copies of "Olive, The Other Reindeer" and "The Tangerine Bear," an ear-marked hardcover of "The Polar Express" and a probably-scratched CD of "Rudolph, The Red-Nosed Reindeer", I was overwhelmed by one thought that I actually said aloud:

It wasn't just the box. Earlier in the day, I asked my oldest, who is coming home for the first time in a year and a half, if he wanted Christmas cookies. This former junk food-loving kid, who is now all about vegetarian, organic and all-natural, said, "Well, maybe just Grandma's cut-out cookies. We can decorate them when we're home, Mom."

The cut-out cookies. The ones my mom made with us as kids that we spent hours decorating, then sneaking from the big freezer out in the garage (found out later she did it too!) The cut-outs she decorated with my kids when I was working and needed her to watch them over Christmas break. The cut-outs we baked and took to the nursing home so we could decorate them with her one last time. The cut-outs my kids insisted we make in the years following, even though I wasn't sure I wanted to.

The holidays look a lot different now - they haven't been the same since 2014, which was a year of many changes, including the death of my mother. I feel like we tried to keep up pretenses and do the same things, but it felt so forced, and not very enjoyable. It was no one's fault - it's just hard to try to keep things the same when they are clearly not.

I really started dreading the holiday season. There was so much pressure yet so much change. I was struggling to find some semblance of tradition when there was certainly nothing traditional about my family. I was tired of feeling as though I HAD to go through the motions just to appease other people. My family was changing, my kids were changing, and I had to change, too.

The past few years have been weird. Last year was the first time I was missing a boy at home, and Facetiming was awkward and just made me feel more wistful. This year we'll be missing one again and it's going to be even harder.

But that box. Man, that box. So many memories are contained in that battered blue bin. Flashes of my oldest at three, standing on a chair in a Santa hat singing along with "Jingle Bell Rock." Two sweet faces licking dough off the beaters and mugging for the camera. Twenty-five straight days of reading "Polar Express" to my youngest before bedtime. A Christmas Story marathon playing in the background on the TV all day long. And those cut-out cookies slowly disappearing from the freezer. 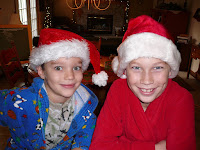 It doesn't really matter what the holiday dynamic is anymore. I laid the groundwork, and I did a good job. I gave the kids that memory bank that they're never going to lose and, as we make this transition to them having their own lives, they have a good foundation to begin traditions of their own.

So for all you young parents out there baking the cookies and staying up late to put together the toys and dragging them to the Festival of Lights and making the same Jell-O mold every year because it's literally the only thing they'll eat, keep it up. You only have a few years to do this before you're going to be opening that battered blue bin and wondering where the time went. And hopefully when you do, you'll say the same thing to yourself: "You did good."

Posted by Amy Talcott at 7:08 PM No comments: