Letting Go (Or, The Story of Earl E. Bird)

A few weeks ago, I opened my front door to find a baby bird standing on my porch, his big, blinking eyes just staring up at me. 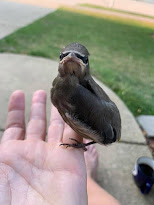 He didn’t appear to be selling anything, so I slowly opened the door and stepped outside. He didn’t move. I sat down on the steps next to him. Again, no movement. Just those big, blinking eyes. I reached out to touch him and he seemed OK with that. I gently picked him up to see if he was injured and again, he didn’t protest.
I assumed, since he kept fluttering his wings but not going anywhere, that he had attempted to fly the coop but wasn’t quite ready. Had it been earlier in the day, I probably would have left him alone in the hopes that momma bird would be back to give him some direction, but it was getting dark and I was afraid he would end up being some night creature’s dinner.
I enlisted the help of my son and his girlfriend (who named him Earl – they said it was after some music artist but I called him Earl E. Bird) and, not knowing what else to do, fed him some worm pieces we dug up in the garden. We discovered he was Cedar Waxwing fledgling, which is a pretty social bird, as evidenced by how he hopped from our hands to our shoulders without batting an eyelash (if birds have eyelashes). I looked up how to care for such a bird and we borrowed a cage and figured we’d let him chill with us for the night.

I worried about Earl all night. When I woke up the next morning, I went downstairs (where he was safely away from our dog and cat), wondering if he would still be alive. Much to my relief, he seemed bright-eyed and bushy-tailed and hopped right on my finger when I opened the cage door.

I sat there with Earl for a while, letting him perch on my shoulder and occasionally make feeble attempts to fly. I knew I had to put him back outside in the hopes that either mom would come by to get him or he would figure out the flying thing on his own. 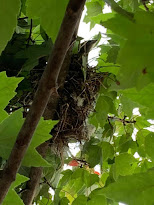 We went out to the porch and as I placed him down, he looked at me with those big, blinking eyes and started squawking. It made my heart hurt a little, but I went inside to see if he’d be able to fend for himself. As he squawked and squawked, I was reminded of the time I attempted to let my firstborn “cry it out,” and wondered how long I’d last before I went out to “rescue” him.

Suddenly, the squawking was met with a response – several, in fact. After about 30 minutes, I looked out and, though I could still hear Earl, he was no longer on the porch. I went outside and looked up in the tree in my yard and there he sat, in a nest, squawking away. Baby bird could fly – at least a little! Relieved but a little sad, I considered that my time with Earl, though short and sweet, was over. 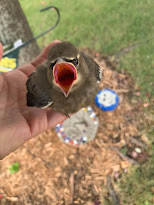 Later that afternoon, I was working in the yard and heard a familiar squawk. I looked over at a little flagpole I have staked in the ground and there he sat with those big, blinking eyes. I said, “Well, hello, Earl!” and went over to see if 1) it was indeed Earl, and 2) he would fly away. He didn’t move. I held out my hand and he hopped onto it and started squawking again. I wondered if I should just take him back inside – put him back in the cage where he would be safe from anything that might hurt this sweet little fledgling.

I raised my hand up to the tree and he hopped onto one of the branches. Before I knew it, he was clumsily fluttering higher and higher, squawking all the way.

This may seem like a silly story about a bird named Earl. But it struck me how this one day kind of sums up being a mom. When you first see your kid and his big, blinking eyes, all you want to do is protect him – forever. You feed him and nurture him and find out everything you can about caring for him. Then one day, you realize you have to let him go – and it’s excruciating. You wonder if he’s ready. You wonder if anyone will be there to help him along the way. You wonder if you did enough to prepare him for the real world. You’re not sure it’s time, even if he thinks it’s time. He can barely fly – how will he survive? But it’s not really up to you.

So you let him go. He might leave the nest on his own. He might fall out and need a little extra help from someone else. He may come back, like Earl did, unsure of what to do next and wanting for some additional comfort from “mom.” And as much as you want to take him in again and protect him from the dangers of the big, bad world, you know you can’t. Baby bird has to learn to fly – and whether he figures it out or not is no longer up to you.

I had an amazing friend who passed away in 2018 after an incredibly courageous fight with breast cancer. Her favorite movie was “The Shawshank Redemption”. When Earl flew away for the last time, I thought of her favorite quote and how true it is right now in my momma heart:

“I have to remind myself that some birds aren’t meant to be caged. Their feathers are just too bright. And when they fly away, the part of you that knows it was a sin to lock them up does rejoice. But still, the place you live in is that much more gray and empty that they’re gone. I guess I just miss my friend.”

Miss you, Earl, and both my baby birds. It brought me great joy to help you learn to fly, but now it's up to you to soar.