Have you ever known that one person who seemingly has it all? Great looks, winning smile, hilarious, talented, always positive, tons of friends, awesome husband, adorable kids ..... ugggghhh.

I first admired her from afar. She was that crazy mom who came sprinting up to the elementary school to pick up her kid just as the bell rang - usually wearing spandex workout capris, a tank top with some inspirational workout saying on it and a brightly colored bandana covering her vibrant auburn hair - yes, always the bandana. Her constant smile and laugh was infectious, and when her son ran up to meet her, it was apparent that this was probably the best moment of her whole day.

I was intimidated and envious - and I wished I could be her friend.

I discovered that as a fitness instructor, she was vigilant about having a healthy body - not a skinny body - but a healthy, strong body, and wanted nothing more than to wrangle others into jumping on the exercise bandwagon with her. I saw friends and admirers flood her Facebook page with comments when she announced the next time she'd be teaching, and her after-class selfies dripped with genuine praise for her students for "crushing it" once again.

She chose a vegetarian lifestyle, which may have been somewhat of a point of contention with her husband, who is maybe not quite as health-conscious as she. But in a style that is true to them as a couple, they poked fun at it by creating a hilarious video called, "My Wife's a Vegetarian" - her husband on guitar and both of them on vocals - it's probably out there on YouTube somewhere.

As I got to know her better, I realized that this woman has a HUGE circle of friends - and not just fair-weather friends. Real friends - like from childhood, high school, college ... all over the United States - and they all adore her. She is quick to love them back; in fact, I've never met anyone who is so filled with love for her husband, her children, her family and her friends. Her gift is her love, which is evident for anyone close to her. She will tear up talking about her magnificent husband, her kids who are growing up way too fast, her incredibly supportive parents and her veritable treasure trove of friends.

All that said, somehow, some way, I got this amazing woman to be my friend - and finally realized what all the fuss was about. She DOES have it all. Great looks, winning smile, hilarious, talented, always positive, tons of friends, awesome husband, adorable kids ...

And cancer. She also has cancer.

She was told years ago that she was at her one child max. Ten years after her son was born, she went to CVS and bought a six pack of beer and a pregnancy test - and eight months later, a beautiful, free-spirited replica of her came into this world. In my mind, it was because the universe realized that the world needs more people like her - so they made one.

We laughed at the fact that she was "starting over" - having kids 10-plus years apart. We adored the spunkiness of her daughter - "just like her", her mother proclaimed - and the baby pictures prove it. We were envious at how she so quickly reclaimed her post-baby body. True to form, the woman went through pregnancy and those baby years like it was a walk in the park - now, we all know it wasn't, but you know what I mean. She did it all like a warrior.

The cancer is back, and she's a motherf*cking warrior.

She continued to teach the fitness classes despite the chemotherapy. She lost her hair and dyed it red. She takes bets on how much fluid will be drained from her swollen tummy. Her posts about her progress are blunt and full of her unique humor: "My liver is being an asshole but if I can get it to cooperate I'll be the mayor of healthytown!" She is fighting, reminding me of one of her favorite phrases of recent years - "Nevertheless, she persisted."

Never in my life have I known someone as inspirational, as vigilant, as strong and as superhumanly powerful as this woman I am so incredibly humbled to call my friend. She is the epitome of a true warrior - and as her friend, I am so privileged to be a part of her extensive, worldwide army that has been assembling itself since the day she was born. I have never seen a more supportive, generous, caring "tribe" - as she calls us all - who I honestly think would do ANYTHING for her. I know I would, and I do not have the longevity that most of her friends have with her.

Here's the thing. You cannot have someone like her walking this earth without acknowledging her amazingness - in fact, we should be shouting it from the rooftops. She should be on a poster somewhere with an arrow pointing to her that says, "WE NEED MORE PEOPLE LIKE THIS." There needs to be a "How to be a Warrior" class - and she needs to teach it.

Make no mistake, here - she was a warrior before cancer, but she's in the fight of her life right now, and I think every member of her tribe feels helpless. We can stand by her side with our arrows and swords, but in the end it is the lead warrior who does the most fighting - it is her battle. If forming a circle around her to shelter her from the blows of this disease would keep her safe, we'd do it. If finding some way to defeat this enemy for her was within our powers, we'd have done it yesterday. If there was a way to bottle her strength, spirit and determination and give it out as a cure, we'd do it tomorrow. 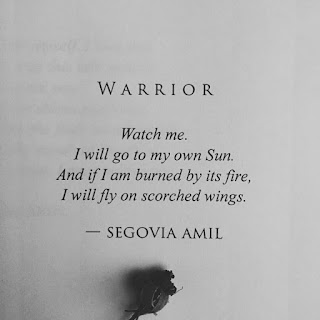 Update: Our Warrior, Amy Poirier Bjornstad, passed peacefully at home surrounded by her loved ones on Tuesday, March 27th, three days after this post was written. Rest now, my love.

Help a warrior; be a warrior. Give to the Jimmy V Foundation and let's get a victory over cancer.